Pressing on vaccines, over 37 million doses by June 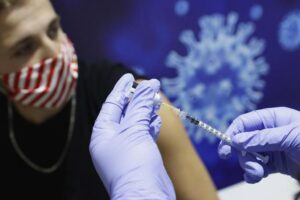 TORONTO – Progress in the immunization campaign against Covid-19. While vaccination continues non-stop in Ontario and other provinces, at the federal level the Ministry of Health has confirmed the exponential growth in vaccine supplies for this May and June. According to Health Canada data, more than 37 million doses are expected to arrive in Canada between May and June, a quantity that will allow individual provinces and territories to comply with the roadmap established in recent months.

These are estimates made according to the supplies established with the pharmaceutical companies that are producing them, the Ministry said. However, of these 37 million doses, 20.3 million doses of Pfizer and one million doses of modern technology have so far been confirmed.

The confirmation of another 11 million doses of the Moderna vaccine remains a question mark – due to delays that have accumulated in deliveries in the last two months and which could also be repeated in June, as well as another 4 million doses of AstraZeneca. Doubts about this vaccine produced by an Anglo-Swedish consortium also remain the doubts related to the risk of thrombosis, a very rare event that in Canada has already caused the death of three people. Some provinces, including Ontario and Alberta, have decided to suspend the administration of AstraZeneca pending data from further studies certifying its safety. In many European countries, including Italy, the vaccine is still used without many problems.

In Ontario, progress in the mass vaccination campaign has spurred renewed optimism in this gruelling fight against Covid-19. Starting today in the province, all residents of at least 30 years old can book an appointment for their vaccination.

This is a further step forward, which will be accompanied from May 24 by the progressive lowering of the age limit: after the Victoria Day long weekend, all adults in Ontario will be able to get vaccinated, while from May 31st it will be possible to book the vaccination of children from 12 to 17 years old.

Cautious optimism was expressed yesterday by Doug Ford, who reiterated that the expansion of the vaccination campaign it will soon lead to reopenings. Officially, the restrictions in force will remain in place until 2 June. It is likely that from that date there will be a relaxation of the measures.