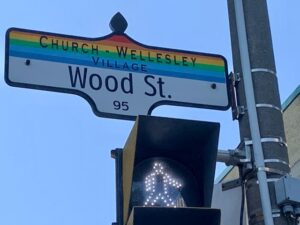 If you find yourself in the downtown core of Toronto and you’re in Church Street, you’ll notice the words Church-Wellesley Village over a background of the rainbow colour (in the pic), a signature of LGBTQ2+, below the street name. This is the gay district of Toronto.

LGBTQ2+ stands for lesbian, gay, bisexual, transgender, queer, and two-spirited. The plus sign stands for the number of other identities. In Toronto, June is PRIDE month. This is the second year that PRIDE will not have any in person event and this includes the transgender parade, the dyke parade and the big one, the gay pride parade which high ranking officials, including Prime Minister Justin Trudeau, join. Ontario is winding down on its third wave of COVID 19 and, in an abundance of caution, the province is reopening in stages after a strict stay-at-home order; hence, no big gathering. In the past, the gay pride parade was always big, festive, well-attended. The last weekend of the PRIDE celebration was always characterized by a closure of Church Street from Friday afternoon to Sunday midnight. On the eve of the Sunday parade, people could be seen milling around Church street, most often in groups, to watch performances on stages built for the celebration. I always watched these performances and once, even under a light rain.

PRIDE wasn’t always celebrated this way. The struggle for LGBT rights was real, at times, defined by protests and riots. 1971 saw the first gay rights protest wherein about 100 people stood on a rainy day in front of Parliament Hill and presented a list of 10 demands for equal rights and protections. The year I immigrated to Canada and settled in Toronto, Pride Week was celebrated and saw the birth of gay pride in the city. In 1978, the ban on homosexuals immigrating to this country was lifted and in 1990, the World Health Organization removed homosexuality as a mental disorder from its list of diseases and health problems. 1991 saw Toronto city officials officially endorsing Lesbian and Gay Pride Day. Twelve years later, Ontario was the first province to issue a marriage certificate to same sex couples. In the next 2 years, BC, Manitoba, Nova Scotia, Saskatchewan, Newfoundland, Quebec, Yukon, and New Brunswick followed suit.

Toronto Centre which covers the gay district of the capital of Ontario has had one gay councillor, a lesbian incumbent councillor, one gay Member of Parliament, and the city had one lesbian mayor. Gays and lesbians, as well as the other members of the LGBTQ2+, are a force to reckon with during election years. They are ardent campaigners and passionate in the causes of their candidates. They stand in subway entrances with their candidates and hand out brochures and pamphlets to passers by. As a supporter of the Liberal Party, I have joined Liberal candidates, introduced them to my Filipino compatriots and graciously asked them for their support. And no, I’m not gay. But I like their work ethics and have the utmost respect for them. And I cheer them during the PRIDE parade, oftentimes joining them in their floats, waving their flags with pride. 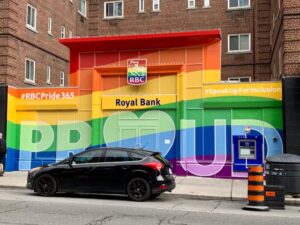 In the pic: Royal Bank tribute to 2021 PRIDE (photo CNMNG)