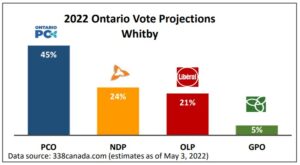 Whitby, a provincial electoral district, is situated along the north shore of Lake Ontario in the Regional Municipality of Durham. It is a relatively new district created in 2015 when it previously included sections of Oshawa and Ajax. Now, the riding encompasses the Town of Whitby, roughly 60 km east of downtown Toronto. 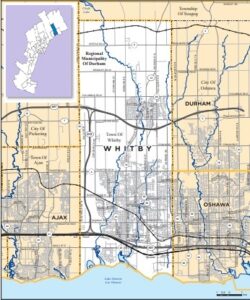 Considered a suburb in the eastern part of the GTA, Whitby offers the best of both worlds for its 128,375 residents. The district is growing into an urban, economic hub while retaining the small-town charm of the area’s rural communities.

Due to its favourable location and amenities, it is a desirable place for people to call home. A considerable portion of residents are immigrants, primarily those originating from the British Isles. 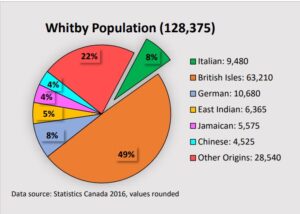 When it comes to those of European decent, Italians make up 7% of the district population. Statistics Canada indicates 9,480 residents self-identify as Italian Canadian, one of the largest cultural groups who originate from Europe.

This time around, candidate Sara Labelle aims to garner more support for the NDP. According to a spokesperson for the Ontario Liberal Party, former Whitby candidate Carleen Blissett withdrew her candidacy a couple weeks ago. As of May 5, the Party has not yet declared a candidate for the riding. Stephanie Leblanc, Green Party candidate, joins the list of names on this year’s ballot. 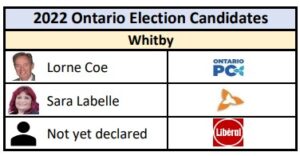 It would seem the majority of electors in Whitby appear content with the current leadership. According to the latest projections by 338Canada.com (May 3), the PC maintain the lead at 45%. The prediction model uses algorithms and considers all major polls. It shows the NDP at 24%, followed by the Liberals at 21%. The GPO fall back at 5%. (See graph at the top of the article)

None of the candidates responded to our request for input as at the time of going to print.