Quebec, a tax on people who are unvaccinated from COVID-19 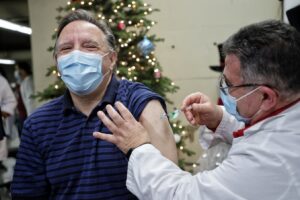 MONTREAL – Here comes the “health tax” for the unvaccinated. Basically: if you don’t get vaccinated, you end up burdening the health system, so it’s right that you pay. This was announced today by the premier of Quebec, François Legault, in light of the continuous increase in hospitalizations (and deaths, only today: 62 in Quebec) in the hospitals of the province.

Legault said he wanted to take charge of the wrath of the vaccinated towards the no-vax “who go to clog the hospitals of the province. Only 10% of the population is not vaccinated, but – the premier said – this 10% constitutes 50% of patients in intensive care beds”. Thus, “a health contribution will be charged to all adults who do not want to get vaccinated. Those who refuse to get the vaccine, in fact, bring a financial burden to the health budget and to Quebec. 10% of the population cannot weigh on 90%” . From the new “health tax”, said Legault, those who cannot be vaccinated for medical reasons will be exempt.

A few hours before the premier’s announcement, another bomb exploded on Quebec health: the director of public health, Dr. Horacio Arruda, resigned on Monday, speaking of “erosion of public trust” while the province is struggling with record hospitalizations during the hardest wave of the Covid-19 pandemic. Premier Francois Legault accepted the resignation, with Arruda’s departure confirmed to The Canadian Press by the premier’s office.

Arruda’s resignation comes as the province is in the midst of an unprecedented wave of infections, fueled by the Omicron variant: on Monday, Quebec was at 2,554 admissions – a new record – in addition to 248 in intensive care that today grew to 255. Also today, there was an impressive number of deaths: 62 (never so high since January 2021, before the vaccination campaign) bringing the total number of victims in the province, from the beginning of the pandemic, to 12,028.

In the letter of resignation, addressed to the premier, Arruda wrote that his office offered opinions and recommendations on public health amidst uncertainty and based on the best available knowledge and various expert opinions, but there was a “certain erosion” of public support for health measures.

As you know, in recent weeks the province has restored several stringent health measures, including a curfew for the second consecutive year, due to the increase in infections and hospitalizations. “Recent comments on the credibility of our views and our scientific rigor are undoubtedly causing some erosion of public support,” wrote Arruda. “In this context, I consider it appropriate to offer you the possibility of replacing me before my mandate expires.” Arruda’s contract was in fact renewed for three years in August 2020.

Arruda had held the position of director of public health since the summer of 2012. In his resignation letter, he offered to serve the government in a different position. “I do not see in this gesture an abandonment on my part, but rather the offer of an opportunity to reassess the situation, after several waves (of the pandemic) and a constantly evolving context,” wrote Arruda.

In the pic, François Legault when he got the vaccine (from his Twitter profile – @francoislegault)