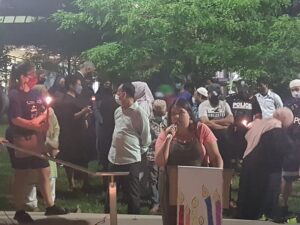 Toronto, June 10: More than 300 people attended a candlelight vigil at the Regent Park last night to remember the hundreds of children whose remains were found buried at a former residential school as well as four Muslims who were run down and killed in London by a truck Sunday evening in what police say was a hate-motivated attack. Thus, all speakers denounce Islamophobia and urge action to defeat anti-Muslim hate and all forms of discrimination among people. 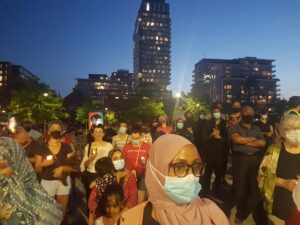 While the vigil was in part a time to grieve the loss of the family, it also served as a reminder of how unsafe many Muslims feel in communities in Canada.

This sombre event drew people from all different communities, including many non-Muslims who chanted: “We stand with our London family” and “Diversity is our strength.”

Ahmed Hussen, Minister of Families, Children and Social Development in Canada was one of the many political leaders — of all political stripes — who attended to speak at the vigil. Hussen said there were no words to ease the grief of having three generations killed while they were out walking in their neighbourhood. He said Canadians made a pact to look out for each other, but for the Muslim community, that pact has been broken too many times and it is time for action now.

Earlier local Toronto City Councillor Kristyn Wong-Tam in her Twitter post said, “Happening tonight at 9 pm. Candlelight vigil in Regent Park to remember our lost Muslim family and #215Children. Mourn and remember them with actions and words. #OurLondonFamily”. Her brief speech there also echoed in a similar tone.

Besides, the local MPP Suze Morrison made an emotional, but thoughtful speech, where she said, “We can’t do thoughts and prayers anymore. We can’t talk about hate has no place in our community; hate is in our community and has taken root. It has a place. It’s been seeded and it is growing. So, how do we get to work uprooting the racism and hate that is growing? It didn’t plant overnight. It was planted seeds in policy decisions. When residential schools came into existence, that was a policy decision, that someone made, the group of people made. A group of men who said, we’re going to eradicate the Indian in the child, residential schools planted a seed of hate and racism that brew in our community. When we have legislation in Quebec, that targets our Muslim sisters for their hijabs. That planted a seed of hate and racism in our community and it grew.”

Among others local MP Merci Ien, Scarborough-Guildwood MPP Mitzi Hunter, and community leaders, such as Khuram Aftab, Sureya Ibrahim and Moqsood Hussainee spoke, and it was hosted by Mothers of Peace Regent Park.