Rift at York Catholic School Board 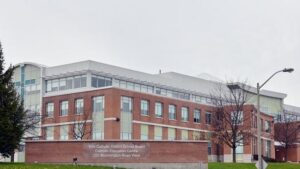 TORONTO – It’s open warfare at the York Catholic District School Board (YCDSB). A war in which everyone is against everyone. The apparent calm that reigns in Board, which for years has been at the center of controversy over incidents of racism, seems to have given way to open confrontation. The decision to recall – following the resignation of Director of Education Robert Hofstatter – former interim Director of Education Mary Battista has overheated. Hofstatter’s departure came just 36 days after his appointment.

On the other hand, the situation of Battista, which is facing criticism, in our opinion, is unfair. Mary Battista cannot be blamed for gaps or anything else: hers is a very respectable curriculum in the field of Education, which goes back in time of 37 years. 37 years in which, with an incredible passion for the world of school, she has increasingly held important roles: French teacher, elementary school teacher, librarian teacher, administrator and superintendent, up to interim director of education. Until last February 26th when she decided to retire. “It is with mixed emotions that I write this farewell message: emotions such as happiness and waiting for a new chapter coming, pain to leave a wonderful working family and a satisfying career and immense pride in everything that has been achieved in my 37-year career,” reads his greeting message posted on the York Catholic District School Board website.

Competence, qualifications, preparation and enthusiasm, a lot of dedication – as always happens when you practice the profession of your dreams – characterize her career. And then, allow us to be proud of her Italian origins. A woman of Italian origin prepared and appreciated both from a human and professional point of view.

Her return to the YCDSB – albeit temporary – does not seem to go down to some groups of people. In a lengthy open letter sent to school trustees of the York Catholic District School Board bearing the signatures of Parents of Black Children, Students Speak up York Catholic District School Board, Black Lives for Change, Italian Canadians for Black Lives and ANCHOR, it is expressly requested that the new interim Director of Education be the “more than qualified” Opiyo Oloyo. This request is only the first in a list of ten.

Without calling into question the preparation that Oloyo is supposed to have, what leaves behind is that the suggestion – if you want to call it this way – in no way guarantees fairness and transparency. Precisely to ensure “fair hiring practices” the YCDSB school trustees Maria Marchese and Maria Iafrate submitted a motion last week calling for the Board to “immediately update its policies, processes and guidelines for all recruitment of non-unionized, contracted and permanent staff, from publication to job offer, to ensure that they reflect up-to-date, fair, inclusive and transparent processes, guidelines and procedures.” The motion should be voted on at the next meeting but, from what has emerged, not everyone is going to support it. The trustees appear divided into two groups. Meanwhile, the mouths are sewn: James Ecker, Jennifer Wigston and Elizabeth Crowe – three of the trustees contacted  by Corriere for comment – did not wish to express their opinion on the matter. “We don’t discuss personnel matters for privacy and confidentiality reasons,” Ecker cut short. “Our protocol is that all communications with the media take place through the Manager of Communications/Chair of the Board,” Crowe and Wigston said. Delegating the comment to the communications director seems like a way to avoid exposure. It almost seems like there is something to hide. Transparency is just a beautiful word.