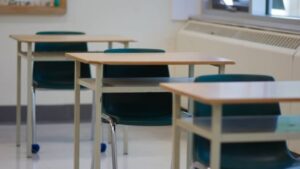 TORONTO – The government is pulling straight. After presenting on Monday the decree law that would cancel the threat of a strike, today it met at 5 am for the second reading of the “Keeping Students in Schools Act”.  “We are at a critical time for our students. Right now, our students need to study continuously in the classroom,” Education Minister Stephen Lecce said during his hour-long opening statement.

His observations focused largely on the need to “keep children in school” after two years of pandemic interrupted the study. “Kids have borne the brunt of this pandemic while their lives have been put on hold,” he said.

The provincial government aims to approve this decree law before the strike of CUPE members scheduled for Friday.

Although the government is working hard to prevent the strike, the Canadian Union of Public Employees (CUPE), which represents caretakers, librarians, early childhood educators, educational assistants and administrative staff on Ontario’s English and French Catholic and public boards, says its members will cross their arms on Friday in protest.

Meanwhile, opposition MPs in Queen’s Park have lashed out at the Ford government’s anti-strike bill which, in addition to preventing workers from going on strike, aims to impose a four-year contract. There will be high fines for those who call or authorize a strike: 4 thousand dollars for individuals, up to 500 thousand dollars to the union.

But not only that: the government intends to invoke the Nothwithstanding clause to protect the decree law from legal disputes. “This is a debate about the foundations of our democracy, it’s extremely scary,” said Chris Glover, MPP of Spadina-Fort York, in response to the government’s intention to invoke the clause allowing the provincial legislature to prevent constitutional challenges.

The very use of Section 33 of the Canadian Charter of Rights and Freedoms, which has the power to annul parts of the Charter, is giving rise to a heated debate. Prime Minister Justin Trudeau has strongly criticized the Ontario government’s use of the clause to impose contracts on education workers and ban them from striking.

Trudeau says the use of the clause to “suspend workers’ rights is wrong” and “although collective bargaining is difficult, this is due process”.

Federal Attorney General David Lametti, for his part, says he is examining how Ottawa might challenge the province’s use of the Nothwithstanding clause, saying its preemptive use is “extremely problematic.”

The hard fist of the government that in any way intends to make sure that schools do not close for the strike does not seem to worry CUPE. “The fight is far from over,” said CUPE Ontario School Board Council of Unions (OSBCU) President Laura Walton.

In the pic above, an empty classroom (Twitter – Alex Johnstone)