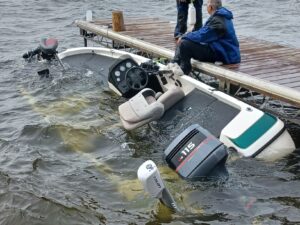 In Brampton, a woman in her 70’s was stuck by falling branches and was later pronounced dead in hospital. The deadly storms (May 21) brought wind gusts of up to 120 km/h leaving a path of destruction with fallen trees and downed power lines leaving more than 350,000 people without power.

The high winds brought down trees and in one instance, hit a camping trailer at Pinehurst Lake Conservation Area near Kitchener. That incident left one person dead and two others injured.

Late Saturday evening, Ottawa police confirmed the death of one individual in the city’s west end but did not provide further details. Meanwhile, Gatineau Police reported that a 51-year old woman drowned after her boat capsized in the Ottawa River.

As destructive as the storm was, three Markham area men are thankful to be alive after their nerve-wracking experience on Rice Lake near Roseneath, Ontario. The men set out for a day of fishing on the Lake when the storm blew in and their boat started to take on water from the crashing waves.

Luckily, they found some help from local residents, Derrick and Diane Wood. The boaters pulled themselves to safety at the Wood’s dock along the Lake’s southern shore.

While the fishermen came out of the storm rather soaked and shaken, they were unscathed. However, their boat was not as fortunate. The water and waves were too much for the vessel and seconds after the men made it to safety, the boat capsized. 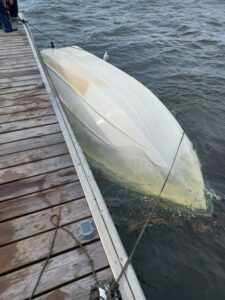 Not exactly the best start to the holiday long weekend.