As they say, vote early and vote… 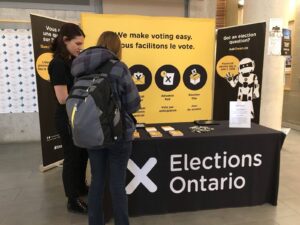 TORONTO – One is tempted to say that the election campaign is all over, except for the counting. No galvanizing or divisive issues of consequence have emerged. The ones that have attracted some attention have been relatively minor. They could be best characterized as tactical.

These are designed, manufactured, simply to embarrass the opponent momentarily. They are not intended to fashion some grand ideal for Ontario society or to enunciate a programme through which any government might develop province-wide projects applicable to all citizens. As a result, the campaign turned out, as we see it, to be a slumber fest.

Barring some unlikely “black swan” event, the election has now become what politicos refer to as an incumbent’s election. This particularly true for the governing party. Although they have fielded candidates in all constituencies, they are not likely to expand into areas where PCs are generally viewed as an alien species.

One exception – a realistic one – may occur in York-South-Weston, where the Premier’s nephew and current City Councillor, Michael Ford, is working diligently to turn the tide in his direction. For the rest, the issue is how much a revival of Liberal fortunes will come at the expense of NDP currency. The “ground game”, the ability of local organizations to get out the vote will determine the outcome.

In 2018, in what is universally referred to as a “change election” (one when electors emphatically decide to throw out a government), 43% of eligible voters could not even be bothered to vote. The 57% who did vote decimated Kathleen Wynne’s governing Liberals. Her legacy still haunts, and hangs over, the heirs of her former party. It did not help that she stayed on as an MPP, even as her successor desperately needed to be in the Legislature to establish a different image from that espoused by the NDP.

Now both parties have fallen victim to fringe candidates advocating marginal positions that sap electability lifeblood from their respective parties. In Toronto Centre, the NDP are placing their hopes on a candidate who administered an anti-Israel website and tweets virulently anti-Catholic nonsense. Not to be outdone, the Liberals in Humber River-Black Creek have fielded a Catholic school trustee who accuses Catholics and her school board of being systemically homophobic and transphobic. Curiously, she snubbed the party rally and official nomination meeting of her own leader on April 30, even though the event took place across the street from her riding.

With all due respect to the valid candidates in all parties, one is tempted to reflect that it is no wonder Premier Ford’s team acts as if it has “dodged a bullet”. Yet he too has questionable candidates.

Stephen Del Duca, the Liberal leader, is seeking election in the riding of Vaughan-Woodbridge. He held the riding until the tsunami of 2018 swept him and others aside. His replacement, PC Mike Tibullo, has the unique distinction of having been demoted twice in Cabinet shuffles. His questionable business practices (he made a habit of suing his own clients, and not only) only came to light after the election. In full disclosure, he attempted to sue the Corriere Canadese and its staff for $10 Million for its legitimate criticism of the disinformation practices of the Harper government in respect of Italy. He lost.

Essentially, the choice for the electorate in Vaughan-Woodbridge is one between selecting a lesser, rapidly dimming, light from Ford’s team or the leader of a Party capable of forming a government in the near future. Vaughan-Woodbridge is home to 55,000 self-identified Italian Canadians (census 2016). We will see how their numbers translate into political acumen.