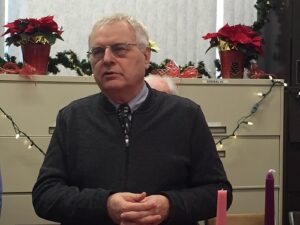 TORONTO – So much for the self-serving sanctimony of the woke generation now seemingly in control of institutions and professional associations. The Ontario College of Teachers (OCT), between Tuesday the 29th and Wednesday the 30th, will hold a symbolic public execution of one Mr. Michael Del Grande… just to prove a point.

One may well ask what that point might be, why? The OCT Discipline Committee (DC) will apparently find him in violation of conduct unbecoming a member of the OCT as per the enabling legislation governing the College.

There are several problems the OCT overlooks. First, Mr. Del Grande has never taught and is not a practicing teacher. Unlike Mr./Ms. Kayla Lemieux, a Halton School Board classroom teacher, allegedly transitioning, whose conduct has exposed Oakville and Canada to international ridicule, he is not in a classroom environment.

He does have a teacher’s certificate, which, presumably, he could convert into a remunerative exercise. Given his age and his position as an elected official, that option may be highly unlikely.

Second, the DC is acting on allegations made by unnamed individuals who, because of their age (minors) or for reasons of their own, refuse to face the accused, as would be require in any Court of Law. The parties to the allegations, made from events that occurred in October-November, 2019, maintained their anonymity until last week.

Some of the issues in the allegations were dealt with by internal TCDSB “investigations” and subsequent Board meetings. Mr. Del Grande was found “not guilty” of any breach of the Trustee Code of Conduct. The TCDSB senior lawyer conveyed the findings to the OCT after the minutes of the meeting were confirmed and accepted.

A reasonable person would have expected that the matter, as far as the OCT may have been concerned – it was never any of their business – would have ended then and there. Mr. Del Grande was acting and speaking in his capacity as an elected official, in the assembly seized of the competence he was elected to discharge on a related topic to the authority of the assembly.

The fact that the OCT arrogates to itself censorship rights over the ability of elected officials is arrogance beyond the pale and a threat to our democratic principles.

Third, the OCT publication of the notice, earlier in this year, on its website, that the “investigation” into Mr. Del Grande was proceeding to a disciplinary hearing, suggests strongly that their mind was already made up about what the OCT would do, facts pointing to injustice showered onto Mr. Del Grande notwithstanding. Plato, an eminent philosopher of Antiquity whose thoughts permeate Western Civilization, was correct: “No one is more hated than he who speaks the truth”.

Remaining on point, the publication of that notice and a summary of the findings of by the “investigating committee” were so precise that it took Corriere Canadese a mere 30 minutes to identify the minor(s) referred in the “investigation”. Assuming we are correct, the OCT would be in violation of the privacy protections available to minors in Law.

It is actually worse than that, when we contacted, via email, the father of the minor in question, he denied knowledge of the complaint. Furthermore, he claimed that neither he nor his child had anything to do with the complaint; moreover, both had moved on.

Last month, an Ontario Court heard pleadings on the legitimacy of the TCDSB trustees’ move to act in place of a Divisional Court Judicial Review to overturn one of its previous, quasi-judicial decisions without going to the proper Court and without providing new information. OCT had no less than five (5) lawyers present.

The OCT does not appear willing to wait for the decision of the Court. There is no legitimate reason for the OCT to move forward. No one should be surprised if, in the event of a decision in his favour, Mr. Del Grande or his supporters file a class action lawsuit that will include the Director of Ed at the TCDSB, Brendan Browne, as well as the [immediate past and the current] Registrar at the OCT.

In the event of a contrary decision, no one should be surprised to see the issue go the route of a Constitutional Challenge in the Supreme Court. No reasonable citizen can or should tolerate such institutional high-handedness.

In the pic above, Michael Del Grande (from https://www.campaignlifecoalition.com)