The Good Lord Called a Good Friend to His Side 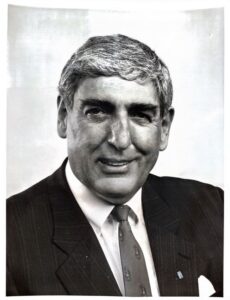 TORONTO – The Honourable Joe Comuzzi (in the pic above), my friend of thirty-three years from 1988 (when we were both elected to serve in Canada’s Parliament), passed away on New Year’s Eve. For twenty years, until he retired in 2008, he also served as my self-described “older brother”. We were not related. Luckily, I did not protest too vigorously.

It is not my intention to reflect on his immense political talents and civic engagement; I would have to deliver on my commitment to author that book on my political experiences to do him his well-deserved credit. Rather, the designation is intended to speak to his character, the loss of his passing represents and the gratitude we, and me especially, owe him and his family.

I did not ask him to play the role. He insisted on watching over me, on giving me advice whether I wanted it or not, on mentoring me, on watching out for me, on educating me in the ways of Canadians from the North, on teaching me about the forestry and lumber business, the role of government to the survival of the North (as in Ontario, primarily), the importance of the transportation sector to Canadian unity, and on dealing with Aboriginal communities as integral to the diversity of peoples in Canada. That is just a start.

My friendly protestations that I was an MP from Toronto, not from Thunder Bay flowed off him like water off a duck. He would say, “Toronto has more than enough MPs capable of mucking things up. Be different. Thunder Bay needs an MP from Toronto; we will take what we can get… that would be you. Besides, what else are you going to do in Parliament, practice your oratorical skills? Look around, everyone else reads from prepared texts. By the way, Ottawa can be a marriage breaker; you are young and have a young family. Work will keep you out of trouble.”

In other words, he was not going to allow me freedom of choice. The problem for me was that he was a bottomless pit of knowledge and acumen. From network- building, to administrative competence, to understanding national issues from bilingualism to Canada-USA relations, to international commerce, to working with and advocating for Aboriginal communities and peoples of diverse backgrounds people, he was without comparison. He worked at it.

I developed the impression that the man had an indefatigable work ethic, “tempered” only by his devotion to his family and his religion.

His wife Janet would tell me how at age 40 he returned to school to earn his law degree, to then work as a Crown Attorney, travelling the breadth of Northern Ontario’s keeping alive the image of Canadian Justice for Aboriginal and single Industry towns that peppered the Boreal forests. She confided that she often felt he might have been afraid to have “moss grow under his feet.” She need not have worried.

He was driven, almost obsessed, by a need to be thorough in his research for and delivery of any “position.” Every institutional official, Library of Parliament researcher, industry sector representative, related Parliamentary Committee MPs or interested Parliamentary Associations would form a line to his office for input or to serve as a sounding board. That was the case when we were in Opposition, in the Backbench or in Cabinet.

His office was across from mine; he demanded I also join the line – for my own education, he would add. Only his family could interrupt the conduct of his business. He treated his constituents like his family… me, like his understudy. I was not always a willing participant, for which hesitancy I would earn his reproach: “you’re going to be a big deal around here; you had better start behaving like you are prepared to learn something about this country’s people and its priorities.”

Before we were sworn into cabinet, he caused me to decline a trip to Italy to promote a tour agency’s initiatives in a Southern region of the peninsula because he had already organized a lobbying exercise in the USA. In three days, we met with 96 Senators, Representatives of the House, the Secretary of Commerce (later with his Deputy and senior staff) various Committee Chairs and Lumber Industry lobbyists.

Unapologetically, he would point out that this is an ongoing exercise if “we [Canadians]” want the Americans to take us seriously. When we both eventually went into Cabinet, I thought he should have been the obvious choice for Canada-USA relations (Global Affairs, Defense, International Commerce etc.). However, pettiness being what it is, even at the highest levels… but he soldiered on. Apparently “they” regarded him as an “independent thinker.” Wonder what “they” thought of everyone else.

No matter, this reflection is about a man who understood and demonstrated a sense of purpose even when others looked to the short-term, easy way out. He worked for solutions risking his own position in the process. It is a life-skill characteristic inherent in “a person with a sense of honour” sadly rarely seen in today’s value structure.

When the same-sex marriage issue threatened to tear apart the Cabinet in 2005, he quietly offered to withdraw, mute his disagreement and work behind the scenes to provide protections for those with a different religious value. I know it was tough. It was the only time I ever heard him question the sanity of some of the Supreme Court Justices who demanded we legislate according to their decision.

“I entered the political world to facilitate, not to obstruct”, he would say to me, “the trick to life is to know when you have to go from one to the other, and when you have to step aside”. Later in our political career, the small minds in his Party and mine, notwithstanding our quasi-insignificant position in Parliament, drew a line in the sand forcing him to choose between the Party and support for cancer care programs in Thunder Bay’s Regional Health Centre.

It reminded me of the quote attributed to St. Thomas More in Reformist, sixteenth century, England: “place not your faith in Princes”. The Party lost an icon of political integrity. Thunder Bay got its health care funding.

Others continued to benefit from his tireless energy until the good Lord and his wife called him to their side, on December 31. He was a great role model. I did not get a chance to say goo-bye.

Even if it may appear unseemingly and self-indulgent, here’s how Janet explained to her daughters who I was when we first met at convention dinner, while Joe and I were busily “working the room”: “he’s a younger version of your father”.

High praise, Janet. Thank you. May you and Joe Rest in Peace.