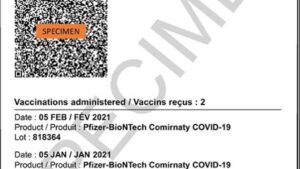 TORONTO – Canada is ready to introduce the vaccination passport. After a long wait – the government had already talked about it in August – starting from November 30 without this certificate it will not be possible to travel.

To announce the important news was today the Prime Minister Justin Trudeau during a press conference in Ottawa. “We are very confident that the vaccination certificate that will be approved at the federal level but will be issued by the provinces with the health information of Canadians, will be accepted worldwide as proof of immunization,” Trudeau said.

It will therefore not be a national passport: it will be up to the provinces and territories to issue a passport for the “standardized pan-Canadian” vaccine that Canadians can use when traveling abroad. In essence, provincial vaccination credentials will continue to be the main way Canadians will need to show their vaccination status.

According to federal officials who answered some questions from journalists before the press conference, the government explored several models, including a document issued at the federal level, but ultimately concluded that the “best way” and way to “make things as simple as possible” was to use the existing provincial certificate as proof of vaccination.

This “standardized” certificate is already available to Canadians whose provinces and territories have issued green passes: Newfoundland and Labrador, Northwest Territories, Nova Scotia, Nunavut, Ontario, Quebec, Saskatchewan and Yukon. The remaining provinces will issue their passports within the next month.

The standardized document will include the name and date of birth of the passport holder, information about the vaccines he received – type, number of doses, when they were administered – as well as a QR code.

The federal government promises to promote this system internationally, so that border agencies, organizations and businesses around the world can recognize and rely on these passports as Canadian documents since the symbol of “Canada” will be placed in the upper right corner.

According to the government, passports will have verification measures and security features that will prevent tampering and falsifications.

Foreign border officials can manually read passport information or scan the QR code with any digital validation technology in their possession.

Meanwhile, Canadian travelers will soon need vaccine documentation for almost all means of transportation, as the federal vaccine requirement for domestic air and rail travel goes into effect next week.