Who in heck is running this place? 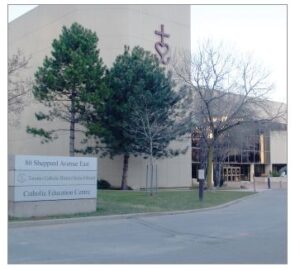 TORONTO – As organizations, Catholic school boards have a specific Constitutional role to play in Canadian society. The one in Toronto seems to be obsessed with things sexual, be they substantive issues like curricula or symbolic ones like flag waving.

Either the CEO – the Director of Education – is unclear about his Leadership duties or the Board is in violation of its mandate. It is in trouble in any case. So is the Minister of Education whose dark shadow looms over both as he pushes an agenda the law prohibits him from attempting to exercise.

As it should be widely known, on May 6, at the insistence of the Director and his staff, the TCDSB decided to proclaim June as pride month and to fly the Pride flag accordingly. The views of the magisterium (the Cardinal’s) to whom both owe their existence and to whom they swear obedience were thrown back n his face with contemptuous disdain.

Teachers’ unions at the elementary and secondary level (both now in contract negotiations with their employer… including the Province) jumped on board, so to speak. They do not displace the magisterium in Law. Their task is to provide a healthy and safe learning environment for the personal and skills development of the children entrusted to their care. Apparently, they cannot convince their own on what strategies to follow to provide “safe spaces”.

A certain Paolo De Buono, whose Twitter attacks on the Cardinal, Catholic values and his employer – the TCDSB – would have earned him summary dismissal in another setting, as he pressed the issue of safe spaces and the flag, took to twitter, in a fit of triumphalism, to declare he would bring charges before the Human Rights Tribunal against the TCDSB for the sufferings he had endured during his struggle (below, De Buono’s tweet).

Mr. De Buono was not immediately available for comment by email.

Not to be outdone, the Director ordered his staff to prepare a census (below, some of the questions) instructing all principals to have parents/students provide a self-assessment of their child’s sexuality as they transition into high school. Yes, Little Red Riding Hood, “the better to see you with” (click here to see the census: Appendix A – TCDSB Grade 9 Student Census – May6_2021).

The legality of such a survey is questionable and the usefulness of “data” so derived is doubtful at best. Such children are 13-14 years old. Hormonal, physiological, emotional and physical change are the natural order of the age, unless the “great unwashed” are missing something. This is a “score on your own net”, suggesting teachers and staff at “head office” are the only ones unaware of the dynamics. Yet, elementary “child psychology” is part and parcel of the pedagogical training for all teachers.

Whether one believes the survey to be a genuine effort at “data collection” or an effort to identify who might be bullied for their “sexuality” (which, remember, is in a state of evolution), this tends to the usurpation of the rights of parents to determine what is best for their children.

It is a rare mother who is insensitive to the challenges facing her children’s journey through life. Every parent is concerned for their child’s safety.

Several parental groups (including Parents as First Educators – PAFE) immediately sent out warnings against completing such surveys. The Board deferred the vote to a later meeting. Others, like Lou and Michelle Iacobelli started a letter writing campaign denouncing the unethical and illegal behaviour of the Trustees. Here some passages of the letter: “(… ) Section 93 of the Canadian Constitution – we read in the letter – guarantees the right of Catholics to run their schools according to their faith. That section states, ‘Nothing in any such Law shall prejudicially affect any Right or Privilege with respect to Denominational Schools which any Class of Persons have by Law in the Province at the Union’. The vote violated this right (…) They take an oath of office to defend, not defy, Catholic teaching. No trustee campaigned for election to reject the guidance of Cardinal Thomas Collins on such Denominational issues”. “Section 29 of the Canadian Charter of Rights and Freedoms, reaffirms the denominational right which Catholics have to Separate schools. The trustees’ job is to defend those rights, not to sell out them out or give them away (…)”.

(To read the complete text of the letter, click here: Illegality and immorality prevail in the TCDSB)

Children can often be cruel to one another as they, like adult role models around them, learn to exploit differences to their personal advantage. It is not always negative, nor does it have to be.

Catholics long ago determined that the trilogy of Home, School, Church (magisterium) working in concert would be the most effective strategy to raise their children for a collective environment.

Maybe Covid has bred a new intelligentsia: the government has shut down Churches and clergy; the Boards are cutting parents – the Home – out of the equation.

Who hired these people?