Canada takes a bolder stance to end climate change. At the International Summit on Climate, Prime Minister Justin Trudeau committed to cut greenhouse gas (GHG) emissions by 40-45% below 2005 levels, over the next decade.

This is a stronger, more ambitious pledge compared to the most recent one, a 30% reduction of GHG by 2030. In real terms, that would mean lowering GHG to 517 megatonnes (Mt). With the new bold commitment, that means a projected forecast of at least 440 Mt by 2030.

“We will continually strengthen our plan and take more actions on our journey to net-zero by 2050”, Trudeau said in a virtual message to world leaders on the first day of the Summit (April 22).

The Federal Government did not reveal the specific plan to achieve the new target. Some of what is known for now is that it will involve investments in Canada’s Net-Zero Accelerator Initiative. A program to incentivize Canadian business and industry to develop net-zero emissions technologies.

The Federal Budget 2021, unveiled on April 19, includes $17.6 billion in investments to build a “greener” economy. It also includes new measures and the implementation of nature-based climate solutions that would help to protect 30% of Canada’s lands and oceans by 2030.

Whether these targets are achievable is the source of much debate. Critics point to history, where Canada has failed to meet its climate goals the government had set in the past. This new ambitious target will not be easily met, and, it also falls short of plans by the US and the UK to reduce emissions by more than 50% below 2005 levels by 2030.

According to environmental advocates, a minimum of 50-60% reduction is needed to limit the rise in global warming by 1.5 degrees Celsius.

US President Joe Biden hosted the two-day live-streamed event (April 22-23) which included presidents and international leaders from all over the world. Several countries participated in the Earth Day Summit including China, Russia, Germany, Brazil and Italy.

Because of Covid-19 precautions and travel restrictions, the event was held virtually. Despite technical glitches and connection delays, world leaders had the opportunity to discuss how each country can set higher climate ambitions and advance innovative technologies which can lead to job creation. It also provided a platform for leaders to consider ways to help vulnerable countries adapt to climate impacts.

Other highlights included the critical role of nature-based solutions to minimize carbon emissions and preserve the planet. To achieve these goals, measures to reduce deforestation and the loss of wetlands, promotion of sustainable agricultural practices, and a restoration of marine and terrestrial ecosystems all factor into the equation.

During the Summit, Brazil’s President, Jair Bolsonaro announced the country would reach net-zero emissions by 2050. Critics are skeptical considering the President’s past conservation efforts and calls to develop protected indigenous reserves.

According to Reuters, just one day after vowing to increase spending to fight deforestation at the Summit on Climate, Bolsonaro approved funding cuts to the environmental budget for 2021. That would reflect a 24% cut to environmental conservation efforts from last year’s level.

The climate crisis is a collective global concern. Increasing temperatures, rising sea levels and extreme weather events present political, social and economic challenges for all individuals. Recognizing the importance of working collaboratively to reduce the global carbon footprint and improve climate action efforts may help lead to an innovative, greener and sustainable future. 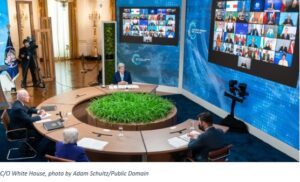