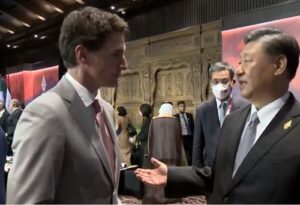 TORONTO – “Lack of respect”. This is the impression Canadians got when they watched the video “captured” during the G20 summit in Bali last week, which immortalized the “clash” between Prime Minister Justin Trudeau and Chinese President Xi Jinping.

As is well known, the leader of the People’s Republic “slapped” Trudeau for having reported to the press the contents of their previous conversation (relating to alleged Chinese interference in the 2019 Canadian federal elections) and the Canadian Prime Minister replied by emphasizing the importance of an open and transparent dialogue.

“Everything we discussed was leaked to the newspapers, it’s not appropriate” Xi told Trudeau who replied: “We believe in free, open and frank dialogue and that’s what we will continue to have. We will continue to try to work together constructively, but there will be things we disagree on”.

What hurt the Canadians, however, was not so much the content of the confrontation between the two leaders, but the way Xi positioned himself towards Trudeau.

The former Canadian ambassador to China, Guy Saint-Jacques, interviewed by CTV, spoke of an “unusual” attitude for a Chinese leader. “In Chinese culture, you shouldn’t make your interlocutor lose face and you expect your interlocutor not to make you lose face. But in the video, we see that Xi Jinping’s face is red… he is agitated because he is waving his arms, which he doesn’t usually do when he meets someone. And he clearly wanted to get a message across. Too bad we didn’t hear everything he said because Prime Minister Trudeau cut off the translator to retort to Jinping” Saint-Jacques said, adding that “clearly, Xi Jinping feels that Canada is a minor country, he doesn’t have much time for Trudeau and this shows how complicated it will be to try to re-establish a minimum of relations… I would say that respect works both ways, and clearly the Prime Minister Trudeau should not have been reprimanded like this in public by Xi Jinping”.

According to the CEO of the MacDonald Laurier Institute, Brian Lee Crowley, “Xi’s body language, who was trying to get away from Trudeau as he was speaking, communicated disrespect, a disregard for what Canada’s prime minister was saying”.

In the Bali-case, Trudeau obviously obtained the solidarity of his ministers, starting with Francois-Philippe Champagne, Minister of Innovation, Science and Industry. “I’m glad our prime minister stood up like he always does for Canada. We won’t tolerate this kind of thing, like interference in our democracy. We must always keep our eyes peeled…”.

But the exponents of the opposition are of a completely different opinion. According to Conservative foreign affairs critic Michael Chong, “the Prime Minister went to the summit unprepared to represent Canada’s interests and values. We have yet to get the Indo-Pacific strategy from the government, it was supposed to be completed a long time ago. Also, it is important that in Canada we take action to counter China’s meddling in our democracy, but Trudeau limited the matter to a private conversation with Jinping” Chong said.

The NDP foreign affairs critic Heather McPherson made matters worse: “It is not the prime minister’s first diplomatic incident and it certainly will not improve diplomatic relations with China. Even delays in the appointment of an ambassador do not help. It is important for Canada to resist foreign interference from China in our elections and we must take every opportunity to diversify our trade. China is not a reliable trading partner and it is important to build strong relationships with other countries in that region” McPherson said.

Meanwhile, several members of Parliament have expressed concern over allegations that China secretly funded eleven candidates in the 2019 federal elections. The Committee on Procedures and Home Affairs passed a motion to devote four meetings to studying the report, calling on several security and election officials to testify before them on the matter. According to Conservative MP Michael Cooper, who tabled the motion, “this interference is simply intolerable. It is unacceptable. Canadians and Canadians only should decide the election results, free from foreign interference”.

A few days before the G20, Foreign Minister Melanie Joly also spoke on the issue of foreign interference in Canadian politics, calling it “intolerable”. And on the occasion he had directed harsh criticism of the Chinese regime, warning Canadians of the possible “risks” of doing business in and around China. “Their interests and values ​​are increasingly diverging from ours” she said. Relations between Canada and China, as we know, were already not good. Let alone now…

In the pic above, Justin Trudeau and Xi Jinping at the G20 in Bali (screenshot from the video shared on social networks)