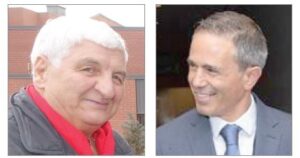 This “A Global Voice for Humanity” is a brainchild of Avi Benlolo, former founder and CEO of the Friends of Simon Wiesenthal (FSW) organization. In a phone interview yesterday, he was proud to announce a dual goal for the trip to the United Nations.

“The ceremony will be held in conjunction with AGPI’s Global Launch in New York alongside a number of Permanent UN representatives and dignitaries”, he added.

It must have been a challenging exercise to assemble a new global human rights organization after he left the FSW.

Mr. Benlolo has put together an impressive number of like-minded people from diverse communities, including the Corriere Canadese’s own Dan Montesano, who in addition to his responsibilities on the Board of the Corriere has accepted to serve on the Board of Governors of AGPI.

The launch aims to establish AGPI’s global footprint in New York as the Delegation meets with Permanent Representatives of several nations and with various UN officials including the Office of the High Commissioner for Human Rights.

The Italian head of Mission at the UN, his Excellency Maurizio Massari, has indicated he would be in attendance, as has his counterpart from Israel.

Among others forming the Delegation with Avi Benlolo are Howard Kerbel of the Menkes Group, Mark Teitelbaum, President of AGPI and Paul Godfrey of Postmedia, and Honourary Chair of AGPI.

In the pic, Danny Montesano and Avi Benlolo