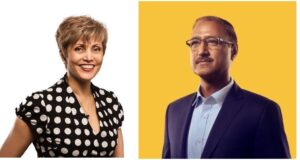 Jyoti Gondek is therefore the first female mayor of Calgary. Born in London in England to Punjabi parents, she moved to Canada with her family in the early 1970s. Jyoti (whose name in Punjabi means “light”), 52, will replace Naheed Nenshi, who has held the most important role in the city for more than a decade. “Thank you, Calgary, with all my heart,” Gondek said in her victory speech Monday. “Thank you for engaging in democracy and sending a clear signal about what our future will look like. Thank you for embracing a vision of promise and opportunity.”

And outgoing mayor Nenshi himself underlined the extent of Jyoti’s victory, with a significant tweet: “History. Done. Congratulations Jyoti Gondek, to you and your team”. He too had made history as the first Muslim mayor of a large North American city.

In Edmonton, former federal government minister Amarjeet Sohi, a Sikh immigrant from India, has instead become the first mayor of South Asian descent. “As an 18-year-old immigrant without much to my name, I had ambitions and dreams of building a better life in a new home – dreams that sometimes seemed impossible,” Sohi, 57, said during his post-victory speech on Monday. evening. “Today, thanks to everyone, we have made the impossible possible.”

Sohi was a bus driver and Edmonton city councilor before entering federal politics and serving as Minister of Natural Resources and Minister of Infrastructure and Communities under Premier Justin Trudeau.

Sohi takes over from Don Iveson who had announced that he would not be running for re-election after two terms as mayor. Iveson himself said Edmonton will thrive under Sohi’s leadership. “I have had the pleasure of working with Sohi during his time as a city councilor and have always appreciated how hard he has worked for our community,” said the outgoing mayor.

The election results will be made official on Friday.

The inhabitants of Alberta, on the occasion of the administrative vote, were also called to express themselves on some referendums: the reintroduction of fluoridation in the water supply of the city, the abolition of equalization payments and the adoption of summer time all day long. year (summer time) eliminating the need to change clocks twice a year. Elections Alberta has announced that the official results of the referendum in municipalities across the province will be released on October 26th.

In the photos above, taken from their respective Twitter profiles, Jyoti Gondek and Amarjeet Sohi