Center-right coalition is a tsunami, record of seats for Meloni’s party 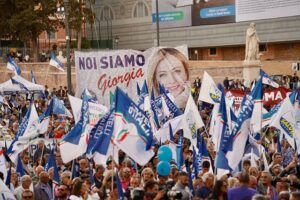 ROME – An overwhelming majority of the Center-right, both in the Chamber and in the Senate. With an army of deputies and senators for Giorgia Meloni’s Fratelli d’Italia. It is the new framework of the Italian Parliament, which emerges radically changed by the last political elections.

But let’s see the data in more detail, while there is still a handful of sections to scrutinize (at the time of writing, 60,375 sections out of 60,399 have been scrutinized): very few to change the now definitive results.

In hindsight… Small note: if the Center-left had presented itself united (Pd with the current allies plus Azione – Italia Viva and M5S) it would have obtained 49.35%. He would practically have won without any doubt.

Turnout at historic lows In the elections for the renewal of the Senate and of the Chamber, 63.91% of those entitled to vote voted: this is the lowest figure ever recorded for politics in Italy. The definitive turnout therefore stood at 63.91%, nine points lower than the one recorded in 2018. Compared to 2018, the regions with the lowest decline in turnout are Lazio, Lombardy, Sicily (where, however, there also were the regional elections), Tuscany and Friuli Venezia Giulia. Relatively high turnout also in Emilia Romagna, while the lowest figures are recorded in Campania, Sardinia and Calabria. In the previous elections, however, it was the South that drove the turnout data compared to the past.

What happens now? What will happen from now on? The first important date is October 13, the day on which the new Chambers, thinned by the recent constitutional reform, will meet for the first time: 400 deputies and 206 senators (including six “for life”). Article 61 of the Italian Constitution in fact provides that the two branches of Parliament are convened “no later than the twentieth day” of the vote. So on October 13, after having given life to the parliamentary groups, the parties will have to choose, as a first act, the names of the presidents of the Chamber and Senate: a vote that in fact indicates a majority and is a prelude to a general agreement on the government. Once the leaders of the Parliament have been elected, the consultations with the Head of State, President of Italian Republic Sergio Mattarella, will begin to call the parties leaders, the leaders of the coalitions, the former presidents of the Chambers and the presidents emeriti of the Republic to understand what the orientations are before entrusting the assignment to train the new executive. Here, usually, the response that will come out of the polls comes into play. If the outcome is as clear as in this case, the assignment will be full and the chosen leader will present him/herself after a few days with a list of ministers. Once the person in charge has agreed the list of ministers with the President, the government will be able to swear an oath at the Quirinale and will consider itself formally installed. Then, however, within 10 days, the premier will have to obtain the trust of the two houses of Parliament. Only at this point will the Executive be in full force.

In the pic above, the people of the Center-right coalition – in particular of Fratelli d’Italia – in celebration (from Giorgia Meloni’s Twitter profile)