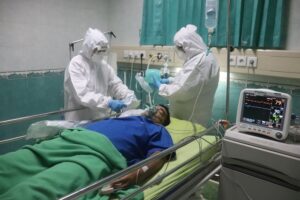 TORONTO – Another 788 new ones from Covid-19, 3 deaths and hospitalizations that attest to growing. Numbers still not very reassuring for Ontario, where the moving average of daily cases calculated over seven days is now approaching 800: today it was 782, a week ago it was 656. It is true that today’s case count is down from Sunday, when 964 new infections were confirmed (the highest number in a single day since last May), but the number of new infections is a substantial jump from the 627 cases of last Monday.

Of today’s cases in Ontario, 412 involved unvaccinated people, 27 partially vaccinated, 315 fully vaccinated and 34 with an unknown vaccination status. Those who are immunized therefore result not disproportionately affected by the virus since 52% of the cases recorded today occurred in 20% of the population that still remains unvaccinated. The positivity rate also rises: with 26,016 tests processed, it rises from 3.4% last Monday to 3.5 today.

The number of ICU patients in Ontario hospitals is now 148, up from 133 last week. Also recorded today, we said, 3 deaths that bring the death toll of Covid-19 in Ontario, from the beginning of the pandemic, to 9,997.

As for the territorial distribution of new cases, the public health units with the highest number are Toronto (106), Windsor (84), Simcoe-Muskoka (80), Peel Region (49) and York Region (48).

Moving on to Quebec, today the province recorded 756 cases and 2 deaths which bring the total to 11,576 since the beginning of the pandemic. The positivity rate in Quebec is now 3.3%: 23,013 samples analyzed.

The provincial data also shows that in the last 24 hours 22 people have been hospitalized and 12 have been discharged, for an overall increase of 10 hospitalizations. There are now 226 people with Covid-19 in Quebec hospitals, including 45 in intensive care (-3). Of the 22 people admitted to hospital today, 9 are not vaccinated and 13 are fully vaccinated.

Speaking of vaccines: according to the latest data, 85% of the population aged five and over received one dose, 81% received two, and 3% received a booster (third dose).

Both Ontario and Quebec have already recorded the first cases of the new Omicron variant.

Photo by Mufid Majnun on Unsplash