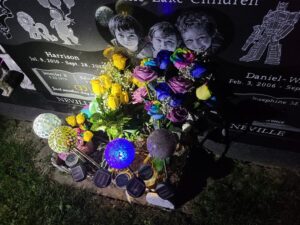 TORONTO – Misfortunes never come by themselves, says a proverb. Edward Lake, whose three sons and father-in-law were killed in a terrible accident in Vaughan in 2015, took his own life. The case has filled the pages of the newspapers for months: driving the vehicle that hit the van of the children’s grandfather, there was Marco Muzzo, scion of a rich family, drunk. A pain, that of Edward Lake and his wife Jennifer Neville-Lake, that can only be imagined.

Lake’s lifeless body was discovered on Monday by Peel Regional Police in Charters Rd in Brampton. According to some sources, the victim had mental health problems. His wife, Jennifer Neville-Lake, worried about his behavior in the garden of the house on Father’s Day, had asked for police intervention. But the next day Edward Lake decided to end his life that without children had lost all meaning.

Lake’s wife confirmed the death on Monday night in a heartbreaking twitter post. “The eyes identical to Harry’s have closed forever. Daniel’s curls will never shine in the sunlight again. I will never again see Milly’s shy smile born on her lips. The father of my children, Edward Lake, joined our children he can play with them, forever.” The message concludes with a greeting in Filipino: “Mahal kita, Edward.” “I love you, Edward.”

York Regional Chief Jim MacSween also posted the tragic news on social media on Monday. “Tonight I was very saddened to learn of Ed Lake’s tragic death. The losses suffered by the Neville-Lake family are atrocious, YRP supports her friend Jennifer and members of both families. May you find strength in the support of your community.”

Almost seven years later, canadians are still etched in the minds of Canadians, even those who did not even know the family, the images of the half-destroyed van, the rescue and the news of the death of nine-year-old Daniel, five-year-old Harrison and two-year-old Milly and 65-year-old maternal grandfather Gary Neville. Neville-Lake’s mother and grandmother were also injured in the crash. Muzzo pleaded guilty to four counts of drunk driving that caused death and two counts of driving that caused physical harm.

But since February 9, 2021, after the Parole Board of Canada granted his request, Marco Muzzo – who served two-thirds of his sentence reduced by nine years and four months – enjoys full probation. The case has struck a chord with the public and has reignited controversy over the Canadian legal system’s tolerance of drunk driving.

Jennifer Neville-Lake, who is very active on social media where she remembers birthdays and the many beautiful moments spent with her children, also shared her heartbreak on the day Muzzo was granted full probation. “My multiple life sentences will never end,” he wrote.

And on Sunday night, Jennifer Neville-Lake, posted on Twitter, Facebook and Instagram a photo of her children’s grave and the message: “Father’s Day 2022. This should not be real. That can’t be true.” The following day, the death of her children was joined by that of her husband.