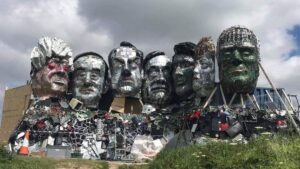 TORONTO –  The Global fight against the pandemic, a common strategy on the vaccine front, the investigation of the origins of Covid.
This weekend’s G7 summit in Cornwall, England, will revolve around these three issues.  This is the first in-person meeting among G7 leaders since late spring 2019, as the incidence of the pandemic worldwide blew up the planned summit last year. Canadian Prime Minister Justin Trudeau will also bring other issues to the table, including the fight against global climate change and coordinated action to revive the global economy after this year and a half of a pandemic.

In addition to the G7 summit, Trudeau is scheduled to attend the meeting of NATO countries scheduled in Brussels, Belgium, and finally the bilateral Canada-European Union meeting.

For the Liberal leader, this is the first trip abroad since the outbreak of the pandemic. Trudeau, who received only one dose of AstraZeneca, will have to spend three days of quarantine at an Ottawa hotel and another 11 days of self-isolation at home upon his return.

On the eve of the G7 summit, meanwhile, there are some rumours about what will be discussed in Cornwall. According to Bloomberg, G7 leaders will call for a “new and transparent” investigation into the origin of Covid-19 from the World Health Organization.

The request would be present in the draft final communiqué seen by the news agency, in which the leaders of the seven advanced economies underline the efforts to end the pandemic by 2022.

The request follows actions taken by the United States, which announced new investigations into the origin of the Covid-19 pandemic entrusted to intelligence in relation to the possibility of a virus leak from Wuhan’s virology laboratory, a hypothesis considered so far “extremely unlikely” by WHO experts. The same request, according to Bloomberg, should be contained in a draft of the EU-US summit declaration. In the draft G7 final communiqué, leaders will commit to distributing an additional one billion doses of Covid-19 vaccines to accelerate global immunization efforts against coronavirus.

According to the Washington Post, however, US President Joe Biden will announce the purchase of hundreds of millions of doses of the Pfizer-BioNTech vaccine to donate them to the most disadvantaged countries.

According to Politico, the Biden Administration intends to purchase 500 million doses of the Pfizer vaccine for distribution to other nations. The decision could lead to the distribution of 200 million doses as early as this year, with an additional 300 million doses to be distributed in the first half of 2022. Vaccine doses will be delivered through the Covax initiative to 92 developing countries and the African Union.

The new Pfizer-BioNTech vaccine order would double the initial agreement made by the U.S. Administration to purchase 600 million doses, of which 300 million have so far been destined for the population of the United States.

For Biden, the one in Cornwall will be the first G7 summit as president, after he was previously president of the Obama administration. First overall, however, for Mario Draghi as President of the Italian Council.