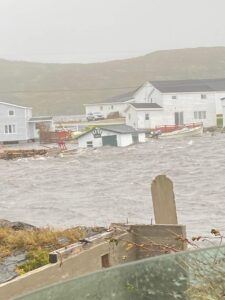 After lashing Atlantic Canada, post-tropical storm Fiona moved inland into southeastern Quebec leaving behind a trail of destruction of vast proportions. Because of its violence – it was one of the strongest storms ever to hit eastern Canada – this morning there were 267,000 users of Nova Scotia Power without electricity, 82,414 those of Maritime Electric and over 20,600 homes and shops left in the dark in New Brunswick. Newfoundland Power reported outages that affected more than 3,600 customers, as winds cut down trees and power lines.

Winds that did not spare Labrador and parts of southeastern Quebec. Then, as Fiona began to weaken, government officials across eastern Canada began to examine the extent of the damage left behind by the violent disturbance.

A storm, which had previously already devastated areas of Puerto Rico and Santo Domingo where numerous people also lost their lives.

In Newfoundland, the hurricane dragged two women into the sea: one of the two women was rescued but the other is still being sought. The situation is one of “total devastation,” said the mayor of Channel-Port aux Basques, a town located at the southwestern end of Newoundland.

Prime Minister Justin Trudeau, who canceled his scheduled visit to Japan for the state funeral of former Prime Minister Shinzo Abe to focus instead on supporting Canadians affected by the storm, said he would visit the affected provinces as soon as possible: “The government is ready to support the provinces with all the necessary resources.” assured Trudeau.

Defense Minister Anita Anand said members of the Canadian Armed Forces had begun preparing even before receiving a request for assistance from Nova Scotia and that troops would be deployed to other provinces in need of help. Anand did not say how many troops will be sent to places devastated by Fiona’s fury, but he did specify that a reconnaissance is underway to make sure the military goes where they are most needed to help with the removal of trees and debris, the restoration of transport links and more.

Prince Edward Island Premier Dennis King said this afternoon that 100 soldiers were on the way to assist the province in cleaning up its streets and being able to return to normal.

In addition, the federal government will match all donations to the Canadian Red Cross from individuals and companies made over the next 30 days.

This evening the winds of the hurricane, which has been downgraded to a post-tropical storm but is no less powerful, fell from 137 to 109 kilometers per hour. The worst, however, should be over.