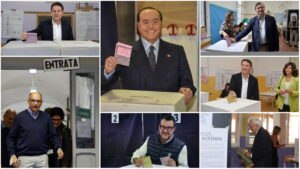 ROME – Everything as expected, or almost: even if as we write only exit polls are available, the crushing victory of Fratelli d’Italia, the first party, is already evident – according to the data of La7 – with a percentage included between 23 and 27%.

Not good Lega (which would be between 9.5 and 13.5) and Forza Italia (between 6 and 8%), but the coalition of the Center-right would still have a clear majority, between 43 and 47%. According to the Rai exit polls, the Center-right could have an absolute majority in both the Houses.

Returning to the La7 exit polls, the Democratic Party – PD would be between 18 and 22% and the results of the allies would not allow him to get close or even remotely to the Center-right: the coalition led by Enrico Letta would in fact reach a percentage between 25 and 29%.

The duo Italia Viva – Azione of Matteo Renzi and Carlo Calenda could overcome Forza Italia: in fact it would be between 6 and 8%.

Surprise M5S: the party led by Giuseppe Conte would have a percentage between 13.5 and 17.5.

Even if the voters turn out was not high, during the day there were long lines at the polling stations. It could be the anti-fraud coupon to cause slowdowns and longer waits than expected: the current electoral law in Italy prevents the exchange vote and the entry of ballots from the outside. The anti-fraud coupon is a progressive alphanumeric code that is detached from the ballot paper only after the citizen has expressed his/her preference. The chairman checks if the coupon number is the same that was noted before the card was handed over. Only at the end of this check, the ballot can be inserted into the urn. For their part, the voters, before inserting the ballot, must check that the cut is detached otherwise, during the scrutiny phase, that ballot itself will be considered ‘non-anonymous’ and will be canceled.

Anyway, voting operations continued without major problems throughout the day. The President of the Italian Republic, Sergio Mattarella, voted at 8.45 am in Palermo: he was greeted by applause from the all the people in the polling station.

The leader of the Lega, Matteo Salvini, voted in Milan: on leaving, he told reporters that he would spend the day with his daughter on a farm. “I count that Lega is the parliamentary force on the podium, first, second or third at the most,” Salvini also said. To those who asked him if fourth place would be a defeat, he replied: “I play to win, not to participate”.

The leader of Italia Viva, Matteo Renzi, voted in Florence together with his wife Agnese Landini: then he left for Tokyo to go to Shinzo Abe’s funeral. The secretary of the Democratic Party Enrico Letta voted in the Testaccio district in Rome.

Azione’s leader Carlo Calenda also voted in Rome, together with his wife Violante Guidotti Bentivoglio. “Vote, vote freely, without conditioning and without fear. Italy is always stronger than those who want it weak,” he said. The leader of the M5S, Giuseppe Conte, also voted in Rome (in the pic above, the leaders at the polling stations).

Change of program, however, for the president of FdI, Giorgia Meloni: she voted in the evening, in Rome, instead of in the morning as originally planned. The choice – explained her staff – was dictated by the need to allow a peaceful vote to the voters: the polling station was packed with photographers and the crowd – it was the evaluation – would not have allowed citizens to exercise their right to vote calmly necessary. A few hours earlier, Meloni herself had posted a video “breaking”, somehow, the electoral silence, while not uttering any sentence for herself or the party, but showing, with unequivocal pose, two melons (in the screenshot below) – “melons” in Italian is translated exactly “Meloni” – and adding the phrase “on September 25 … I told you everything …” followed by a wink. 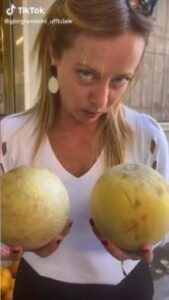