Flamborough-Glanbrook MPP, focused on expanding opportunities for all 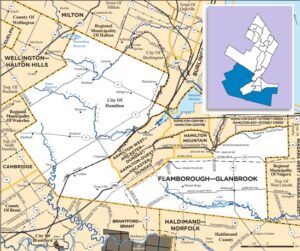 Created in 2015, the provincial electoral district of Flamborough-Glanbrook is situated along the southern outskirts of Hamilton. The riding encompasses the rural portion of the City of Hamilton, including part of the Niagara Escarpment. It covers an area of 125 square km, slightly smaller than that of Turin, Italy, but with a population density about one seventh that of the Italian regional municipality.

The geographically diverse region has been popular among European settlers, primarily those of British origin. It is home to 111,065 residents of different cultural and ethnic backgrounds and continues to be a desirable place to live. Statistics Canada says 13,125 constituents self-identify as Italian Canadian. They are among the largest groups originating from Europe at 12% of the district population. 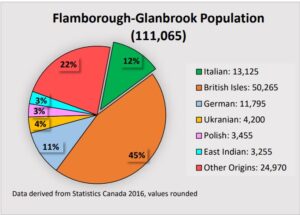 When contacted, MPP Skelly pointed to the riding’s uniqueness with its urban and rural divide. “This creates a number of diverse concerns”, she told the Corriere. She elaborated on some of the pressing issues which included “the expansion of the urban boundary, a lack of affordable housing, tax disparity between the city and rural areas of the riding, the lack of adequate internet in the rural areas and the lack of public transit to connect the entire city”.

MPP Skelly acknowledged the growing population’s impact on the housing shortage that will continue to drive up housing prices. “As Ontario’s population and our economy continue to grow, building more homes that people can afford is another way that we’re keeping costs down for families in Hamilton and across the province”, she added.

The majority of electors appear content with her leadership. According to the latest projections by 338Canada.com (April 21), the PC are in the lead at 42%. The statistical model that uses algorithms and considers all major polls indicate that the NDP trail by eighteen points, at 24%. The OLP are close behind at 23%, followed by the Greens at 5%. 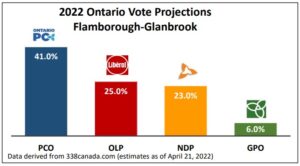 This time around, candidate Allison Cillis aims to garner more support for the NDP. She was not available for comment prior to our going to print. Meanwhile, the OLP have yet to declare a candidate for the riding. 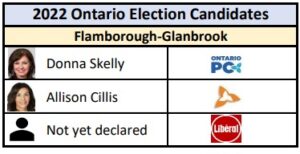