Ford: “Bill 124? Doesn’t exist”. But then he opens up to private healthcare 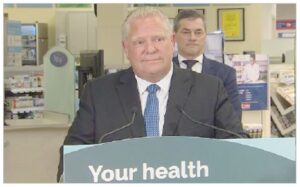 TORONTO – Private healthcare can “help” where public healthcare does not arrive: this is essentially the message launched by the premier of Ontario, Doug Ford, during today’s press conference – the first of 2023 – in which, while opening to private healthcare, he also declared that the notorious Bill 124 – the legislation that capped wage increases for most public sector workers at 1% for three years – “doesn’t exist”.

A statement that surprised the journalists present, given that the provincial government has appealed against the court’s decision which annulled that legislation. “Bill 124 has lapsed,” Ford insisted, despite the Ontario government formally appealing the ruling that two weeks ago called Bill 124 “unconstitutional,” because it would violate the applicants’ rights to freedom of association and collective bargaining.

According to the government, the court “erred in holding that the financial impact of the law’s limits on compensation increases substantially interfere with the defendant’s rights to a meaningful collective bargaining process.” And again according to the government, the judge badly described the reason why bill 124 was implemented, i.e. the problem of managing the finances of the province. A concept, the latter, which the premier reaffirmed just today. “I always have to be a prudent tax manager with taxpayer money,” Ford said. “We can’t just go out there spending willy-nilly while people are scrambling to get by. Citizens are taxed to the brim right now, they can’t just keep giving, so we have to consider everything we can.”

During the press conference, Ford was questioned about bill 124 also because in recent days it had emerged that the provincial government was aware of the fact that the legislation could have contributed negatively to the crisis of the health personnel. Which then actually happened: the hospitals in the province have been collapsing for months due to a lack of personnel, both doctors and nurses, whose exodus is probably also linked to the impossibility of obtaining adequate wage increases for the emergency situation that has arisen since the Covid.-19 pandemic began. But again Ford denied this, calling that theory “inaccurate” because “more than 60,000 nurses have been hired since 2018”.

In the pic above, Ontario premier Doug Ford during today’s press conference (from the video posted on his Twitter profile)