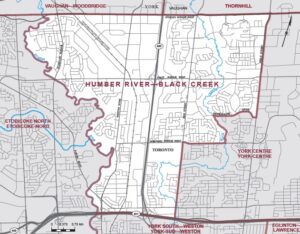 The area is comprised of a diverse population with people originating from several different ethnic backgrounds . According to Statistics Canada, in 2016 (most current data available), Italians make up a significant portion of the population, at 13%. That translates to 13,800 residents. Other cultural groups include those who identify as East Indian, Jamaican and Vietnamese.

Traditionally a Liberal stronghold, Judy Sgro, is seeking re-election for the Liberals. She has represented the riding since 1999 when it was formerly known as York West. She was re-elected in 2019 with 61% of the vote. She defeated NDP candidate, Maria Augimeri who took 19% of the vote, followed by Conservative candidate Iftikhar Choudry with 16%.

This time around, candidate Matias de Dovitiis aims to garner more support for the NDP. He told the Corriere Canadese he recognizes the diversity of the constituency and is committed to the Party’s message which includes building more affordable housing, reducing the cost of prescription drugs and to forgive student debt.

A spokesperson for the Judy Sgro Campaign commented on the dynamic multicultural rich community: “Seen as a welcoming home for a large number of newcomers, our focus in this riding is on housing and giving people a hand up rather than a hand out”. 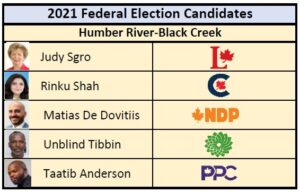 Rounding out the field is this election is candidate Rinku Shah for the Conservatives, Unblind Tibbin for the Greens and Raatib Anderson for the PPC.

According to the latest projections by 338Canada.com (August 29), which uses algorithms that take into account results of all major polls, the Liberals are in the lead with 61.2%. The NDP trails at 20.3%, nearly a 6-point lead ahead of the Conservatives at 14.7%. 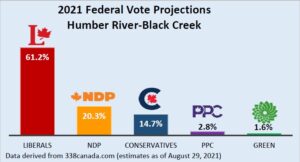