Kabul, women’s protest does not stop 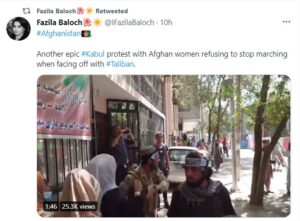 KABUL – “Another epic #Kabul protest with Afghan women refusing to stop marching when facing off with #Taliban“: the tweet was posted today by Fazila Baloch, an activist who has been publishing images of the protests of Kabul women for days. In fact, in the Taliban capital, not a day goes by without Afghan women, now deprived of any rights and freedoms, taking to the streets to express their dissent. And, thanks to social networks, their protest is amplified worldwide.

“The Taliban must understand this: today’s Afghanistan is not what they ruled 20 years ago. Then they did what they wanted, and we remained silent. But now not anymore. We will not accept everything they say, we will not wear the burqa or stay locked in the house”, Ramzia Abdekhil, one of the protesters, told the Turkish newspaper Hurriyet which collected various testimonies which were then relaunched by press agencies and online information portals from all over the world.

“We are not afraid of the Taliban. We will continue the fight for our work and for equal rights. No government in the world should recognize the Taliban if they govern as they did 20 years ago”, added the woman, interviewed along with two other demonstrators in the ‘families area’ of a restaurant in the Afghan capital, as women are no longer allowed to sit in public with men who are not part of their family.

“I used to work in a bar and at the same time I was studying at the university. When the Taliban took over, the bar closed and I lost my job. I don’t know if I will be able to go back to the university. Before we were free, we could work and go out alone. But now we are locked at home. We are worried” said Sureyya Nesret, another protester interviewed. Despite the risks, the activists assure them that they want to continue their commitment, as Maryam Meshel Hashimi explains: “When the Taliban arrived, only the women raised their voices. But if the men support us, we can achieve a lot against the Taliban”.

But not even the offensive of the new rulers against everything that is culture, art and freedom stops. Especially if it concerns women.

One of the symbolic photos of the last few days is that of a grand piano, completely damaged and smashed: it was part of the instruments of the first and only female orchestra in Afghanistan. Music was already banned between 1996 and 2001 and only strted again after the expulsion of the Taliban. Today, with their return, the “seven notes” are again in the crosshairs – not only in a metaphorical sense, in light of the barbaric killing of the Afghan singer Fawad Andarabi, in recent days – , especially when they involve women, favorite victims of the new government.

Yesterday, the news of another ban: no “pink” sports. Women may be uncovering too much. The testimony, reported by various newspapers, of Hamidullah, women’s soccer coach, is dramatic. “The Taliban came to look for me at home, they did not find me just because I was faster than them to escape, to find a faraway refuge. But I can no longer live like this, perpetually threatened, hidden. About the photos of matches on Facebook that seem decades old, I have no more news of my students. In a moment we are plunged back into total darkness “. Hamidullah is wanted because, he says, “I trained girls. They definitely don’t like it”.