“The music is over”. Taliban kill Afghan singer 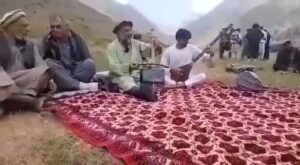 KABUL – In 2021 Afghanistan, music is also a crime. It is enough to sing to risk your life. And so Fawad Andarabi, who could not live without singing, was killed. The Taliban brutally murdered him. They dragged him out of his home in Andarab in the southern part of Baghlan province. And they “executed” him.

The news was announced on Saturday with a tweet by the former Afghan Interior Minister, Masoud Andarabi: “Taliban’s brutality continues in Andarab. Today they brutally killed folkloric singer, Fawad Andarabi who simply was brining joy to this valley and its people. As he sang here ‘our beautiful valley… land of our forefathers…’ will not submit to Taliban’s brutality” wrote the former minister, attaching a video of the slain singer, where an elderly man is seen sitting on a carpet stretched out on the lawn of a mountain valley, singing and playing the ghichak (or ghaychak), a bowed lute. Next to him, a boy with another typical musical instrument of the country.

Taliban’s brutality continues in Andarab. Today they brutally killed folkloric singer, Fawad Andarabi who simply was brining joy to this valley and its people. As he sang here “our beautiful valley….land of our forefathers…” will not submit to Taliban’s brutality. pic.twitter.com/3Jc1DnpqDH

The Taliban had already visited Fawad in recent days: they had searched his house and then had tea with him, as his son, Jawad Andarabi, told the Associated Press. But a few days later something changed. They came back and “they shot him in the head on the farm. He was just a singer who wanted to entertain people”, said the son who is now demanding justice. Taliban spokesman Zabihullah Mujahid told the AP that the insurgents would investigate the murder. Taliban investigating the Taliban.

The news of Faraw’s death immediately went around the world, causing dismay everywhere. Karima Bennoune, the UN Special Rapporteur on Cultural Rights, wrote on Twitter that she had “grave concern” over Andarabi’s killing. “We call on governments to demand the Taliban respect the #humanrights of #artists” she added.

Agnes Callamard, the general secretary of Amnesty International, denounced the killing in the same way. “There is mounting evidence that the Taliban of 2021 is the same as the intolerant, violent, repressive Taliban of 2001. 20 years later. Nothing has changed on that front. On other fronts: In addition to the Taliban, we now have ISIS, AQ and probably a few more”, she tweeted.

That music represents a “problem” for the Taliban had already emerged in recent days, when the new regime announced that the “seven notes” would be banned from the country. And so it was. As reported yesterday by India Today, the Taliban banned music on radio and television in Kandahar. Not only that: the transmission of female voices is also prohibited. Since the seizure of power, despite the first “relaxing” announcements against women, several journalists have no longer been admitted to the workplace.

Music, radio and television, journalism. And there is also something for the comedians: the news of the killing of Nazar Mohammed came a few days ago.

Known as Khasha Zwan, he became famous for his skits in which he made fun of the Taliban through song and dance, some of which were uploaded to social media. But his latest video was shot by the Taliban.

The images, which have gone viral, show Khasha Zwan as he continues to mock his tormentors despite being dragged away from home to shoot him. In the video, the comedian is sitting in the back of a car: he keeps making jokes about the group, so much so that the Taliban fighter on his right starts slapping him in the face, while the man on his left laughs all the time, before ominously changing his rifle for an even larger firearm: a Kalashnikov. The video ends, but the conclusion of the story is known: Kasha was killed against a tree with several gunshots and lying on the ground with his throat cut. So now no one will laugh anymore, in the darkest of regimes.