King-Vaughan: A two-horse race between Liberals and Conservatives 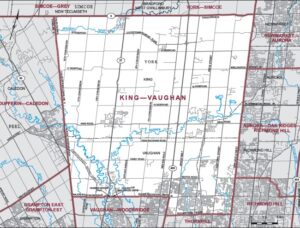 At the north western edge of York Region is the electoral district of King-Vaughan. The constituency was created by the 2012 federal electoral boundaries redistribution and includes parts of the Township of King and the City of Vaughan.

According to the 2016 Census, King-Vaughan is home to 131,995 residents. It is a riding with one of the highest concentrations of Italian-Canadians. Roughly 40,955 constituents are of Italian origin, that represents 31% of the area’s population. 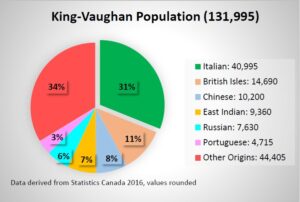 Deb Schulte, current MP, is seeking re-election for the Liberals. She has represented the riding since 2015 when she was supported by 47% of voters. In 2019, Schulte was re-elected with 45% of the vote. She beat out Conservative candidate Anna Roberts who took 43% of the vote. This is the second time both opponents will face off in a general election.

The uniqueness of the district is reflected in the diversity of its urban and rural areas, including the vitality and challenges present throughout. Schulte, a former York Regional Councillor, with degrees in mechanical and aerospace engineering, told the Corriere, “the main issues raised at the doors is affordability, climate change, childcare, housing, seniors support and finishing the fight against Covid”.

“I have made it my personal mission to connect every home in rural areas to high-speed broadband and have delivered for over 1,500 local rural homes and counting. For urban commuters, we’re funding the extension of the Yonge North Subway to York Region to make commuting quicker and more affordable”, she added.

“Liberals have a proven track record delivering for our community and a strong plan to address these issues and build a better future for Canadians”, she said. Her focus moving forward is to build on the “historic investments in community centres, greenspaces, libraries, firehalls, trails and active transportation in the community”.

Affordability is a common theme across all party lines. Roberts, said: “My background in finance, and my volunteer experience with the community, has thoroughly prepared me to both understand the issues facing our residents, and to fight to help make life more affordable for our residents”. 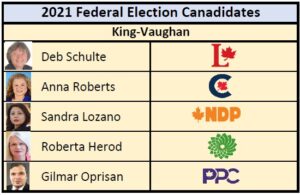 Rounding out the field of candidates are Sandra Lozano for the NDP, Roberta Herod for the Greens, and Gilmar Oprisan for the PPC. They were unavailable for comment prior to our going to print.

The district is proving to be a tough competition between two major political parties, with Conservatives in the lead. According to the latest projections by 338Canada.com (September 14), which uses algorithms that take into account results of all major polls, the Conservatives, at 44%, are ahead of the Liberals by 4-points. The NDP, at 7.8%, trail the Liberals by 32-points. 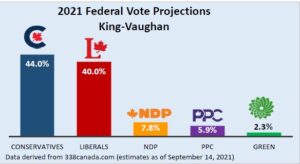