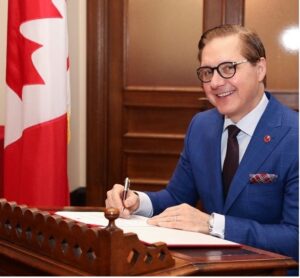 We publish an update from the Honorable Tony Loffreda (in the pic above), independent Canadian senator, about his work as the sponsor of Bill C-32, the government’s Fall Economic Statement Implementation Act, 2022.

OTTAWA – With its Fall Economic Statement (FES), which Deputy Prime Minister Chrystia Freeland presented in early November, the government has reiterated its commitment to help families cope with the increasing cost of living by delivering additional targeted support to Canadians who need it the most.

Fall economic statements usually gives the government an opportunity to provide Canadians with a mid-year update on the country’s economic growth and the state of its finances.  The FES will typically include the government’s outlook for revenues and program expenses as well as long-term economic projections.

Like most countries, Canada’s reaction to the pandemic was quick, early, and swift.  The government provided Canadian individuals, families, and businesses with the necessary financial support to make ends meet.  Despite extraordinary spending measures, Canada is coming out of the pandemic in a relatively good position.

As Minister Freeland said during her update, Canada’s economy is now 102.6% the size that it was before the pandemic, our economic growth has been the strongest and our net debt-to-GDP ratio is the lowest among G7 countries at 30.5%.  The unemployment rate is 5.2% and inflation is slowly coming down after peaking in June.

Many refer to the FES as a mini-budget because it regularly also contains policy announcements including proposed changes to taxation.  As such, the FES is usually accompanied by legislation.  This year, Bill C-32, which was introduced on November 4th in the House of Commons, seeks to implement certain provisions announced in the FES along with previously announced measures from the spring budget.

I am honoured to serve as the sponsor of this bill in the Senate.  Part of my role as the sponsor is to guide the bill through the different stages of the legislative process which includes supporting my colleagues in their understanding of the bill, what it seeks to achieve and the rationale behind these measures.  As sponsor, I will also kick-off the debate in the Chamber at both second and third reading.  Those speeches are probably going to be delivered in early- to mid-December.

Divided into four parts, the bill contains 172 pages and 29 specific measures, 21 of which make changes to the Income Tax Act.  The last time I sponsored a bill (C-30), it contained six pages and one measure.  In comparison, C-32 is a massive piece of legislation that touches on many different aspects of our lives and has multi-sector and wide-ranging implications.  However, I accepted to sponsor the bill because I still felt that it offered targeted relief for specific segments of the population and made appropriate changes to various acts, while limiting spending.

For example, students will surely appreciate the elimination of interest on Canada Student Loans and Canada Apprentice Loans.  Entrepreneurs should welcome the proposed tax cut from 15 to 9 per cent by more gradually phasing out their access to the small business tax rate.  Young families will hopefully be able to take advantage of the new Tax-Free First Home Savings Account and the doubling of the First-Time Home Buyers’ Tax Credit.  Seniors and their families might also enjoy the introduction of a new Multigenerational Home Renovation Tax Credit.

Another key measure in the bill is an initial allocation of $2 billion (out of a previously announced $15 billion) towards the new Canada Growth Fund (CGF) which seeks to attract substantial private-sector investment in Canadian businesses and projects to help grow and transform Canada’s economy on a path to net-zero.  With the passage of the Inflation Reduction Act in the United States, this Fund is urgently needed to help Canada compete internationally for capital investment.

Many of the measures contained in C-32 build on those that were adopted in recent weeks by Parliament including the doubling of the GST Rebate, the implementation of a new tax-free dental care program for youth, and a one-time $500 rental housing subsidy for lower and moderate-income Canadians.

Bill C-32 is currently before the House of Commons for its consideration.  In order to ensure the bill receives Royal Assent before the holidays, the Senate has undertaken a pre-study of the bill and I expect we will adopt it by mid-December, thus ensuring Canadians can rely on and soon benefit from some of the measures contained in the legislation.