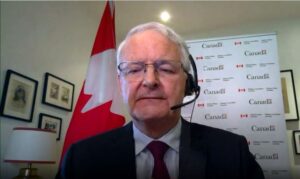 The conference, which was also attended by Minister Marco Medicino, followed the withdrawal of all American troops from Afghanistan on Monday, at the end of a war that lasted twenty years and cost billions of dollars and tens of thousands of lives, including those of over 150 Canadian soldiers and civilians.

With the United States and most Western countries out of Afghanistan, the fate of those left behind remains uncertain. Canada and other allies are pushing the Taliban to allow anyone with valid travel documents to leave Afghanistan, Garneau said, in the hope that Kabul airport could soon reopen under civilian control. While the Taliban have already made that commitment, “we will judge them by their actions, not their words,” Garneau said. “Afghans with travel documents to other countries must be allowed to travel safely and freely without interference. Canada and its allies are firm on this point”.

The end of US and allied evacuation flights from Kabul left Canadian veterans, refugee advocates and others to consider next steps to protect hundreds of former interpreters and local staff, as well as their families who remain stranded in the country: among the alternatives, there is the risky journey to neighboring Pakistan. “We will speak to Pakistan to tell them that if anyone arrives at that border or in other neighboring countries, we would like them to facilitate their entry”, Garneau added.

The liberal government has been criticized for not acting fast enough to rescue the Afghans who helped Canada during its military mission: the special immigration program announced a few weeks ago relating to the entry of 20,000 Afghans into Canada has been plagued by bureaucratic and technical problems, but Mendicino defended the government stating that “Canadian immigration officials are continuing to process applications as quickly as possible in the hope that people can get to Canada”.