Niagara West: A PC island in a sea of NDP support 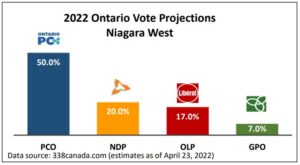 The constituency of Niagara West is situated along the south-west shore of Lake Ontario. The district spans an area of 1,057 square km and encompasses the towns of Grimsby, Lincoln and Pelham. It also includes the western portion of the City of St. Catharines and the townships of West Lincoln and Wainfleet. 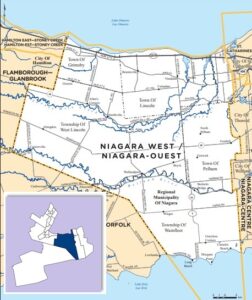 Geographically, the riding is part of the Niagara Fruit Belt, a region with a thriving agricultural and agri-production industry. That alone, is one of the many reasons that have made the area a desirable place to call home for 90,840 residents of different ethnic backgrounds, a majority of which originate from Europe.

For instance, Statistics Canada indicates 8,370 constituents are of Italian origin. That represents nine percent of the district population. It is also a demographic of the population that has a culture of voting. 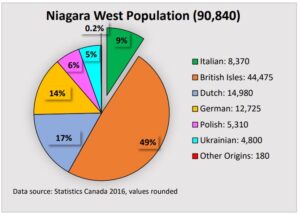 The riding was first contested in 2018, following the 2012 federal electoral redistribution in which the district was recreated from the constituencies of Niagara West-Glanbrook, Niagara Centre and St. Catharines.

This time around, Oosterhoff seeks to retain the seat for the PC. He holds the only PC seat in the Regional Municipality of Niagara. His closest contender, candidate Dave Augustyn, aims to build more support for the NDP.

The former Mayor of Pelham (12 years) told the Corriere that he would “take a pragmatic approach” and work with the party leader to address the issues of affordability, health care, education and climate change.

Building support for the party may not be easy. According to the latest projections by 338Canada.com (April 23), the PC maintain a lead at 50%. The NDP trail at 30%, followed by the Liberals at 17%. (See graph at the top of the article) 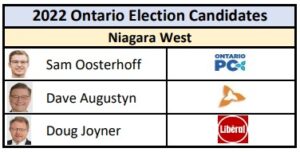 Doug Joyner for the Liberals, rounds out the list of candidates for the district’s top three political parties. The other party candidates did not respond to our requests for input at the time of going to print.