No incumbents in Windsor-Tecumseh for this election

Windsor-Tecumseh, a provincial electoral district in Southwestern Ontario, encompasses the town of Tecumseh, part of the city of Windsor and stretches east and north close to the Canada-US border. The riding has been represented by either the NDP or the Liberals since the 2007 provincial election. 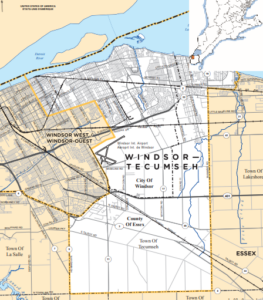 For nearly a decade, Percy Hatfield, current MPP, has represented the riding for the NDP. He was elected in 2013 when he took the riding over from the Liberals. Hatfield was re-elected with 58% support from the electorate (25,221 votes). The PC took 27% of the vote and the Liberals followed at 8%. The margin of victory was 13,544 votes.

Regardless of the election outcome, one thing is certain, Windsor-Tecumseh will definitely have a new MPP. Hatfield’s name will not be on the ballot as he chose to not run in this election. Instead, Gemma Grey-Hall is the NDP candidate. Her closest contender appears to be PC candidate, Andrew Dowie.

When contacted, Dowie told the Corriere he acknowledged that the riding has had a “tremendous longstanding incumbent MPP” …[but]… “His voters are looking for a new home and for a successor that will continue his legacy of respect and hard work, but also elevate that representation to the next level”, he said.

Dowie pointed to the current government’s vital investments in the region including the Stage 2 planning funding for the Windsor-Essex Regional Acute Care Hospital, infrastructure projects like the Highway 3 expansion and the renewal of many schools.

Candidate Gary Kaschak, aims to garner more support for the Liberals. A feat that may prove challenging. So far, the NDP with 49% appear to be in the lead, according to the latest projections by 338Canada.com (April 2). The statistical model that uses algorithms and considers all major polls indicates the PC hover around 26%. The Liberals, at 12%, trail the PC by fourteen points. 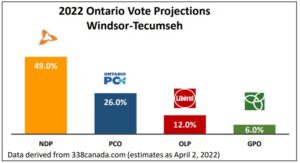 The district is comprised of a diverse population of 117,430 and home to people from different ethnic backgrounds. According to Statistics Canada, 10,485 residents self-identify as Italian Canadian. They are among the largest concentration of ethnic groups that originate from Europe and represent 9% of the district population. 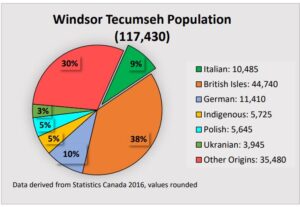 Other party candidates did not respond to our request for comment prior to our going to print.