Oakville, a tough race between the PC and OLP 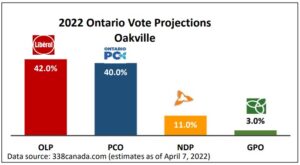 Oakville is a provincial electoral district that was created in 1999 from the ridings of Halton Centre and Oakville South. It is situated along the northwestern edge of Lake Ontario and encompasses part of the Regional Municipality of Halton and part of the town of Oakville. 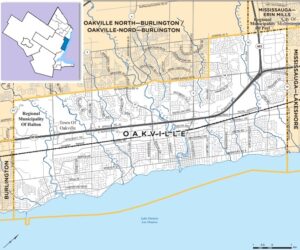 The constituency, with a population of 120,925, has been a popular place to settle for immigrants. For instance, Italians are among one of the largest ethnic groups originating from Europe. About 9,900 residents identify as Italian Canadian, as per the 2016 Census. They represent 8% of the district population. 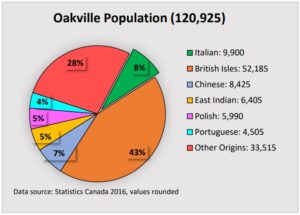 While election day is less than two months away, things appear a little closer between the two major parties. This time around, Crawford will face of with Liberal candidate Alison Gohel. The NDP have not yet declared a candidate for the riding.

According to the latest projections by 338Canada.com (April 7), a statistical model which uses algorithms that considers all major polls, the OLP at 42% lead the PC by only two points. The NDP are further back at 11%. (See projections at the top of the article)

When contacted, Crawford shared his Party’s message with the Corriere saying, “our government is committed to supporting the province’s public health care system and has increased health care spending more than any other Ontario government to date”.

Oakville is a popular base for numerous regional and national head offices including Ford Canada and Tim Hortons. With labour issues one of the main concerns heading into this election, Crawford pointed to “the 330,000 jobs in Ontario that need to be filled” adding “our government is committed to the economy and fighting to keep jobs in Ontario”.