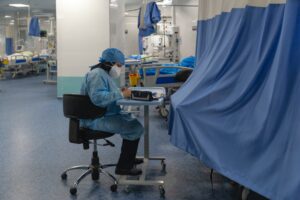 TORONTO – The Covid-19 Science Advisory Table will be dissolved on 6 September. Public Health Ontario is planning to replace the scientific advisory board with a new, smaller group that will be “less independent.” This is what we read in a public health Ontario memo obtained by The Canadian Press.

The group of scientists and public health experts who have provided independent advice on the response to the Covid-19 pandemic say that their work has been stopped, although the Ford government insists that this is not the case. The controversy, as can be easily deduced, has already erupted. In the document, the province’s Science Advisory Table sets out a long list of concerns about what they say is the agency’s plan: “it will stifle the independence of the new group in selecting topics to pursue, will not allow outside scientists to collaborate with briefs, and will hinder the group’s ability to communicate the results to the public,” the memo reads.

The scientific table was initially promised that the new terms of reference would be based on its original mandate but on August 11, the negotiating committee of the scientific table received a draft with the new terms of reference created by Public Health Ontario and the Chief Medical Officer of Health Moore: from this it appeared that it was not based on any previous document agreed by the parties. Shortly thereafter, according to sources who do not want to be identified, the Science Table was informed by Public Health Ontario that the group would be disbanded.

Among the concerns of the Scientific Technical Committee were not being able to select topics, the name of the new group – the Ontario Public Health Emergencies Scientific Advisory Committee – would confuse the public, unclear criteria by which the 15 new members would be chosen, the lack of an agreement that the president was a scientist, and the failure to have external scientists co-author briefs. “This will critically limit the ability to engage external scientists and trainees and reduce the norms of scientific transparency and accountability of the work produced,” the memorandum reads.

And while members of the Science Table say they are “deeply grateful for having had the opportunity to serve Ontario since July of 2020,” and that “many of us will remember our work for the Science Table as one of the most important jobs we have ever had the chance to do,”

Prime Minister Doug Ford continues to reiterate that the government is by no means eliminating the Committee. “The work previously done by the table will be ‘absorbed’ by Public Health Ontario and will continue in some way. We’re not eliminating it,” Ford said.

It should be noted that during these two years and more of the Covid pandemic the advice and guidance of the Scientific Committee has often been opposed to the actions of the government and its former scientific director, Dr. Peter Juni, has been particularly explicit in this regard.

Meanwhile, the current director, Dr. Fahad Razak said he hoped that “any future advisory group will be guided by the principles of true scientific independence and transparency, a focus on fairness and a dedication to defending individuals and communities that have been disproportionately affected by Covid-19”.