Ontario schools will not return to in-person learning in June 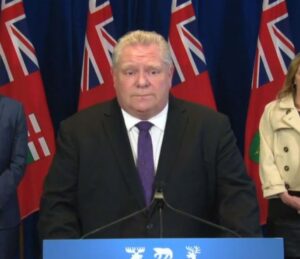 TORONTO – Ontario schools will remain closed until the end of this school year, and students will have to continue with distance learning. The confirmation of a decision that had already been taken by the government was officially announced today by Doug Ford and Stephen Lecce, who reiterated that at the moment the path of caution and prudence is – in their opinion – the right one if we want to return quickly to normality. “This is not an easy decision to make – admitted the Premier of Ontario – but we believe it is the right one.”

The school plan is, in fact, a component of the executive’s strategy along with the more specific one of reopening the economy. “Right now,” Ford continued, “our priority is to put this third wave behind us so that we can enter phase 1 of our reopening roadmap. We cannot risk increasing cases and the potential impact on hospitals and intensive care units.”

The prime minister, however, rejected the axiom that came from the opposition, that he had chosen the economy at the expense of the school. “This is not the case,” he said, “unfortunately we still have few vaccinated children and few vaccinated teachers. The health authorities recommend that the outdoor and outdoor areas be enhanced, and at the moment we cannot risk jeopardizing the progress made so far. With this difficult decision we will then be able to allow children to go to summer camps and practice outdoor sports activities. Finally, we will have a safe return to school in September.”

The premier then pointed out that in recent days the executive has tried to examine and weigh up all potential hypotheses, consulting with the scientific control room and closely monitoring the data related to the evolution of the epidemiological curve. In the end, Ford reiterated, the closure of schools and continuous distance learning seemed to be the best solution.

While this decision was not made lightly, it has been done with one aim: protect the summer for families and deliver a stable and safe September for students,” said Stephen Lecce, Minister of Education. “We are looking forward and taking action by getting all education workers and students vaccinated with both doses ahead of September while investing an additional $2 billion to ensure students and staff are safe.”

According to the minister, with deliveries of vaccine doses expected to stabilize and increase during the summer, the hypothesis of vaccinating all teachings and students of at least 12 years by the beginning of the next school year.

After the school front is closed, the government will now focus on reopenings. An announcement on the transition to Phase 1 before the scheduled time – 14 June – is expected to arrive this week, although from this point of view there is no confirmation from the executive.