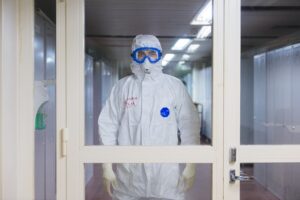 The seven-day moving average of daily cases now stands at around 565, still down from around 574 the previous week.

Another 6 deaths were also reported on Thursday, bringing the total death toll in the province since the start of the pandemic to 9,776.

Now 279 people are being treated in Ontario hospitals, with 149 patients in intensive care units (ICU): of the latter, 134 are not fully vaccinated or have an unknown vaccine status.

Anthony Dale, President and CEO of the Ontario Hospital Association, pointed out that there are now fewer than 150 Covid-19 patients in ICUs across Ontario. “For this Thanksgiving Day, we have a lot to be grateful for, especially this one; Ontario is now under 150 Covid-related critical illness patients in ICU for the first time in about two months” he said on Twitter. “Let’s keep it up and keep careful as we celebrate this weekend”.

Most new infections continue to be found in the Greater Toronto Area. Toronto reports 114 new cases while Peel reports 55 and York 42. Apart from Windsor-Essex (45) and Ottawa (32), all other municipalities have reported fewer than 30 new cases.

On the schools, 121 cases were identified, of which 106 in children. Eight schools are currently closed due to outbreaks. 12 additional cases have been identified in childcare facilities and seventeen daycare centers are closed.

Across Ontario, 4,575 cases are still active (known ones).

Five other people, we said, died of the disease, bringing the total to 11,405.

On the hospitals, another 28 people went to hospital while 25 were discharged, bringing the total number of hospitalizations to 297, an increase of three. Of the 28 newly hospitalized patients, 12 are unvaccinated, 2 received a dose more than two weeks ago, and 14 were vaccinated twice more than a week ago. Today, 6 patients entered intensive care while 8 were discharged, bringing the total to 88.