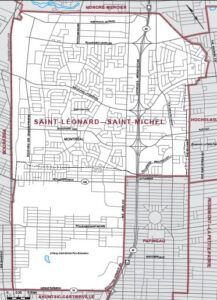 The electoral district of Saint-Léonard – Saint-Michel, formerly Saint-Léonard, is located in the City of Montreal, east of the constituency of Bourassa. With a population of 113,210 residents, it is home to a number of culturally diverse ethnic groups.

According to Statistics Canada, in 2016, the most current data available, Italians make up 23% of the constituents in the district. That translates into 25,510 residents, one of the largest concentrations of Italians in Quebec. 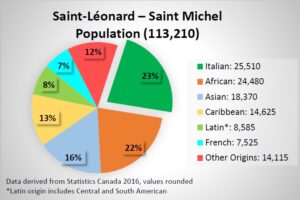 Patricia Lattanzio, the first woman to represent the riding since its creation, is seeking re-election for the Liberals. In 2019 she was elected into office with 61.3% of the vote. The Conservatives managed only 11.9% followed by the Bloc Québécois (BQ) with 9.6%.

The district has a history of strong Liberal representation. Between the years 1997-2002, Alfonso Gagliano held the riding for the Liberals until he was succeeded by Massimo Pacetti who served in the Liberal caucus until 2014. From 2014-2015 he sat for the remainder of the term as an Independent. In 2015, Nicola Di Iorio was elected to represent the constituency until his resignation in January 2019.

Saint-Léonard – Saint-Michel may be considered one of the safest districts for the Liberals in all of Canada. According to the latest projections by 338Canada.com (September 6), which uses algorithms that take into account results of all major polls, the Liberals, at 62%, are ahead of the Conservatives by 40 points. The BQ at 6.8% trail the NDP by less than half a point. 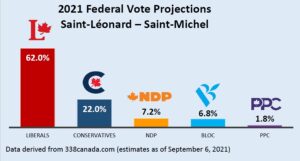 This time around, Lattanzio is up against Louis Ialenti who aims to garner more support for the Conservatives. Rounding out the field are candidates Laurence Massey, Alicia Di Tullio and Daniele Ritacca for the BQ, NDP and PPC respectively. 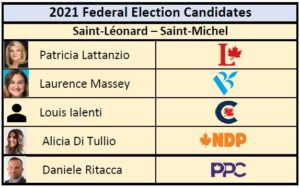 Candidates were not available for comment prior to our going to print.