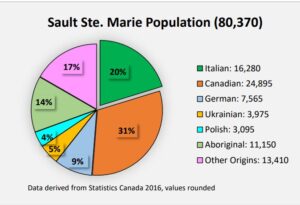 The provincial electoral district of Sault Ste. Marie (the Sault), situated in Northern Ontario, is about a 700 km drive northwest from Toronto. The constituency is located at the southern tip of Lake Superior along St. Mary’s River, just north of the international boundary between Canada and the US. It is where the largest of the Great Lakes flows into Lake Huron. The St. Marie’s International Bridge is the only fixed link crossing between both countries and a key trade route for Canadian and American markets.

The district covers an area of 247 square km (slightly larger than that of Verona, Italy). It encompasses the city of Sault Ste. Marie and was created in 1902. 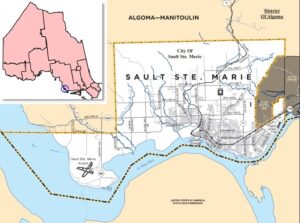 According to the 2016 Census, the Sault is home to 80,370 residents. As with other districts in the area, immigrants make up a considerable portion of the local population. Those who identify of Italian descent make up 20% of the district’s residents. That represents 16,280 constituents, the largest concentration of Italian Canadians in Northern Ontario. (See graph above)

Historically, the constituency has been represented by all three major political parties. Current MPP Ross Romano is seeking re-election for the PC. He has represented the riding since the 2017 by-election when he took the riding over from the Liberals. He was re-elected in 2018 when he won 42.0% of the electorate with 13,498 votes.

NDP candidate Michele McCleave-Kennedy took 40.7% of the vote. The margin of victory was only 414 votes. That year, the Liberals only managed to secure just under 10%. This is the second time both Romano and McCleave-Kennedy will face off in a general election. Meanwhile, the Ontario Liberals have not yet declared a candidate for the riding. 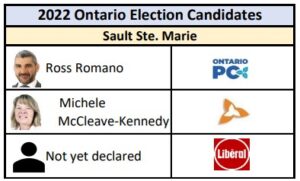 The NDP candidate told the Corriere, via email, that “I’m passionate about making sure our kids and grandkids have good job opportunities right here in Sault Ste. Marie”. As a self-proclaimed advocate, community activist and small business owner, she said “I know how important investing in health care, education and economic recovery after the pandemic will be to building a great future for our community”. Echoing her party’s message, she expressed her determination to fight for “better health care, better seniors care and more homes people can afford”.

So far, the PC, with 39% appear to be in the lead, according to the latest projections by 338Canada.com (March 27). The statistical model which uses algorithms and considers all major polls indicates the NDP sit at 30%. Twelve points behind are the Liberals at 18%.

Other party candidates were not available for comment prior to our going to print.