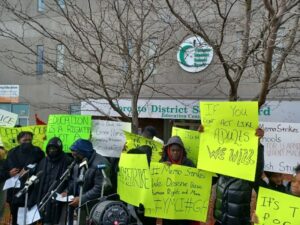 TORONTO – One placard at the student demonstration before the high school George Harvey/York Memorial last Friday caught my eye “[Teachers] if you don’t act like adults, we will”. (in the pic above – photo Corriere Canadese). It is gone now but for a moment, it came across as a cheeky rebuttal to the news of the previous week when teachers, speaking under cover of anonymity painted a picture of students conducting themselves as hooligans training for criminality.

The truth is a little different, on both sides of the teacher/student equation. Neither of them are the prime movers in the “cause”. Parents have a rightful expectation that, when they send their children (yes, teenagers are still children, in Law, until they turn eighteen) to school, the environment will train them in the skills they will need to be adaptable, versatile and productive citizens of tomorrow. The expectation also includes an explanation of what it means to integrate into and shape the social cultural milieu of tomorrow.

Yesterday, we could not help but point out the obvious, even if from the student perspective, it led to a one-sided conclusion. Moreover, taking into consideration only skin pigmentation, one might infer that “the system” was deliberately working against a particular group. If so, that would be a damning condemnation of the TDSB’s woke agenda [part of which we referenced from the Board’s own website] and how a vision statement founded on human rights is supposed to work.

Only one placard and one student referenced human rights; that, in the context that it is the human rights of students to receive instruction. Readers might be mildly surprised to learn that the Federal government spends millions in overseas aid to ensure instruction and education for the underserved native populations of developing countries.

In co-operation with provincial authorities, similar programs find their way to communities that experience economic and social challenges. Education is still the best vehicle to emerge from economic disadvantage. We owe it to ourselves to provide our fellow citizens with the skills to raise themselves up.

There is no arguing that something is working. The leadership of the TDSB is a case in point. Most Senior staff, including the top official, the Director, appear to fit the image of role models for students demonstrating at George Harvey/York Memorial. So, what is wrong at schools such as these?

They are not alone. Check out the populations of the schools that make headlines in the daily news. Even the students we spoke to expressed a sense that the schools were glorified “holding cells” with little or no purpose defined as achievable goals. It is not surprising.

Many of the students come disadvantaged academically. If the ABCs of learning at whatever level are a factor in creating positive self image and nurturing ambition, these students entering high school have been dealt a debilitating blow at their elementary schools.

The Fraser Institute ranks the “quality” of these schools based on their scores on Provincially run standardized tests (in math, reading and writing). These are designed to provide “a tool” to schools and boards for improving student performance.

The score for George Harvey was 2.4. If you are a parent looking for an alternative in the Weston and Downsview area, consider these options and their scores: Runnymede, 3.9; Downsview, 2.9; Westview Centennial, 2.4; Emery, 2.1; Weston, 2.0.

The elementary schools preparing students for these schools would appear to be falling well short of the mark for adequate preparation of their children. They are placing these kids… our kids… at a huge disadvantage. At a great social cost, I venture to add.