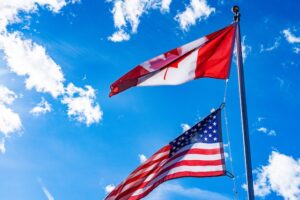 TORONTO – Where is it better to live? In Canada or the United States? Canadians have no doubts: in their own country. This is what emerges from a survey carried out by Abacus between 11 and 17 July on a sample of 1,500 adults. The result is overwhelming: only 1 in 10 Canadians think it would be better to live in the United States. For 91%, Canada is better. And this “feeling” is quite consistent in all the provinces of the country.

In particular, to doubt (that is, that very narrow 9% of respondents) that Canada is better are men under 45, conservative and no-vax voters.

The authors of the research asked Canadians how they thought their lives would change if they lived in the US, taking into consideration four different aspects: crime, health care, economic security and entertainment. Well, the majority of respondents think Canada is better than the United States in all four respects.

Only a minority, we said, think completely differently. Specifically, younger men think they would be better off financially and enjoy life more if they lived in the United States. Conservative voters, in turn, have another opinion about health care: only 60% of them believe it is better in Canada, and only a third of them think that Canada is a better place to earn money, to live and to enjoy life. The no-vaxes also represent a “world apart” from the majority of Canadians: only half of this group, in fact, think that living in Canada means being safer from violence or enjoying better health care than the United States. And many of them also think they would be better off financially and enjoy life in the US more.

The complete research is here: https://abacusdata.ca/canada-us-which-is-better/

Photo by chris robert on Unsplash