The NDP set to hold on to Hamilton East-Stoney Creek 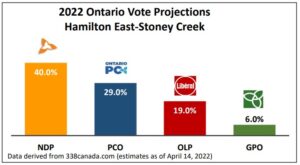 The provincial electoral district of Hamilton East-Stoney Creek was created in 2007. It is situated at the western tip of Lake Ontario along the southern shore. The riding encompasses part of the City of Hamilton and includes several communities like Stoney Creek that lie north of the Niagara Escarpment. 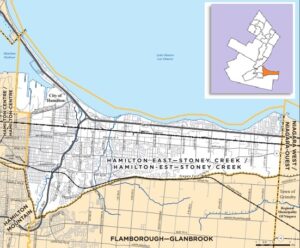 Historically, the Hamilton area has been popular among immigrants, most notably, those originating from Europe. At 15% of the district’s population, Italians make up one of the largest ethnic groups in the constituency. That represents 15,740 who self-identify as of Italian heritage according to the 2016 Census (most current data available). 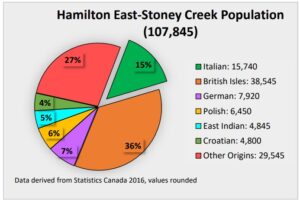 Since its creation, the majority of constituents have been steadfast supporters of the NDP, and in particular of one Member of Parliament. For fifteen years, Paul Miller, current MPP, had represented the constituency for the NDP.

However, that changed earlier this year when the NDP removed Miller from caucus. He currently sits as an independent. At the time, the Party cited “unacceptable” information uncovered during the vetting process. It was alleged that Miller was a member of an anti-Muslim Facebook group called the Worldwide Coalition Against Islam, allegations he indicated to be fabricated and false. The NDP said Miller would not be allowed to run for the party in the June 2 election.

It would appear the NDP are hopeful for a similar outcome, even though they have yet to officially name a candidate for the riding. According to the Ontario NDP website, the nomination meeting is scheduled this evening (April 19) to vote for the approved contestant, Zaigham Butt.

The closest contender, candidate Neil Lumsden, aims to gain more support for the PC. Meanwhile the Liberals have not yet declared a candidate for the district. Although, the Liberals state on their website that they will officially nominate Jason Farr at tonight’s nomination meeting. 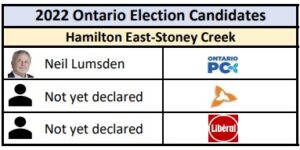 According to the latest projections by 338Canada.com (April 14), the NDP maintain the lead at 41%. The statistical model which uses algorithms and considers all major polls show the PC at 29% followed by the Liberals at 19%. (See graph at top of the article).

None of the parties responded to requests for input at the time of going to print.