The US leaves Kabul, the Taliban: “We are free from the invaders” 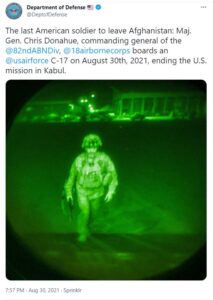 KABUL – The image of the American general who, lastly, boarded the plane which, with its take-off, marks the end of twenty years of mission in Afghanistan, went around the world. He is Christopher Donahue: 17 US military missions in Afghanistan, Iraq, Syria, North Africa and Eastern Europe. And the image, tweeted by the U.S. Department of Defense, was taken at night: the commander of the 82nd Airborne Division (which is part of the 18th Airborne Corps based in Fort Bragg, North Carolina) walks alone, with his weapon in his right hand, ready to board C-17 with the Kabul airport hangar in the background, just before the deadline set by the United States for evacuations (and the ultimatum of the Taliban).

“This was an incredibly tough, pressurized mission filled with multiple complexities, with active threats the entire time. Our troops displayed grit, discipline and empathy”, tweeted the 18th Airborne Corps, commenting on the photo of the general, sent to Afghanistan in August to protect the Kabul airport. “The withdrawal means both the end of the evacuation of military material (destroyed or rendered useless the war materials that could not be taken away) and the end of almost twenty years of mission that began in Afghanistan shortly after 11 September” , announced General Kenneth McKenzie, head of the American Central Command.

“It is a mission that brought Osama Bin Laden to justice along with many Al Qaeda co-conspirators”, he continued. Then, he assured that there are no American soldiers left in Afghanistan, they all left the country with what President Joe Biden himself called “the largest air evacuation in US history, with over 120,000 US citizens, citizens of allied countries. and Afghan friends of the United States evacuated “.

As for civilians, fewer than 250 Americans remain: “A shame”, according to the Republicans, “to have abandoned them there. The president has made a mess, the world is less safe with him”, denounced the president of the Grand Old Party, Ronna McDaniel.

The last C-17, the one on board with General Donahue, therefore took off from the Kabul airport at 15.29, time on the American east coast, 21.29 in Italy, Afghan midnight between 30 August and 31 August, today. “Tonight at exactly midnight the last American soldiers left the Kabul airport and our country has gained complete independence. Praise God”, said Taliban spokesman Zabihullah Mujahid, today morning from the international airport ‘Hamid Karzai’ of Kabul, which is now totally controlled by the Taliban.

“Congratulations to Afghanistan – he said – this victory belongs to all of us. The Islamic Emirate is a free and sovereign nation”. The “defeat” of the US represents “a great lesson for all the other invaders and for our future generations” as well as “for the whole world”, he added, continuing: “We want to have good relations with the United States and with the whole world. We will open up to diplomatic relations with everyone”.

But the US Secretary of State, Antony Blinken, while declaring that the United States “will work” with the Taliban if they keep their commitments, also announced the withdrawal “of our diplomatic representation from Kabul. We have transferred it to Doha, in Qatar”.

Beyond any unlikely diplomatic relationship, Mujahid in his speech at the airport nevertheless reiterated that “now the authority is in the hands of the Afghans, we will form an Islamic government and guarantee security. Our desire is that our country does not come never invaded again. We want peace, prosperity and a true Islamic system”. And, addressing a group of men in combat gear, he thanked them “for their efforts to achieve independence. We are proud of your sacrifices. It is thanks to honesty and patience that we are independent today”, said Mujahid, asking the Taliban fighters to “be kind” to the Afghan people. “They had suffered a lot, and deserve to be treated with love. So be kind to them. We have not imposed ourselves on them. We are their servants”.