Trudeau says the government can revoke the Emergencies Act 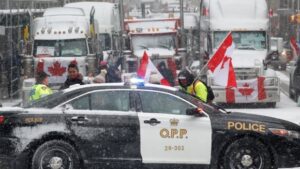 OTTAWA – “After careful consideration, we are ready to confirm that the situation is no longer an emergency. Therefore, the federal government will end the use of the Emergencies Act “. With these words, today, during a press conference, Prime Minister Trudeau revoked the Emergencies Act invoked last week to end the blockades of the Freedom Convoy in downtown Ottawa. Following Trudeau’s announcement, Ontario Premier Doug Ford declared an end to the state of emergency in the province.

The Freedom Convoy demonstration seems over but the desire to nail the organizers and participants to their responsibilities is immense.
The Ontario Provincial Police (OPP), after discovering that some of its officers may have donated money to protesters in Ottawa and other parts of the province, launched an internal investigation.

OPP spokesman Bill Dickson confirmed in an email sent to CBC News that the force is aware that an unknown number of its members “appear to have made donations to the illegal protest rally in Ottawa.” “The matter has been brought to the attention of the OPP Command and the OPP Professional Standards Unit has launched an internal investigation into the conduct regarding the matter,” Dickson said.

It was thanks to a massive operation that last weekend the police managed to evict protesters from downtown Ottawa: 191 were arrested and 389 counts were charged against 103 people.

And the names of thousands of people who donated money through the crowdfunding website GiveSendGo to support protests against the vaccination obligation and public health measures to curb the spread of Covid-19, following a cyber attack have become public. “The OPP cannot comment or speculate on the outcome of the investigation at this time,” Dickson said.

However, the provincial police spokesman said that “the OPP holds its members accountable for their actions both while on duty and out of work.” They have an obligation to demonstrate neutrality and remain impartial, any manifestation or expression of views and opinions that can be interpreted as acceptance of illegal activities, is in direct opposition to the values and mandate of the OPP.”

But under the magnifying glass not only the agents of the provincial order force ended up. The Toronto police are also scrutinizing the behavior of two of its members whose names appeared on the long list of participants in the Fundraiser in favor of the Freedom Convoy: “Since this is illegally obtained data, we do not speculate on their validity – we are aware of the existence of multiple lists in circulation that could be altered or manipulated”, Toronto police said today.

Meanwhile, Ottawa, after three weeks, is gradually returning to normal as a large group of its citizens has decided to file a $300 million class action lawsuit against Freedom Convoy protesters. “We have been tortured by noises for days, we have been harassed, they have honked their horns at full volume in the streets – said Zexi Li, promoter of the cause – in the end these people are all adults who have consciously made these decisions. We gave them ample opportunities to leave but they chose not to. They have to pay the consequences.”

Some participants in the convoy have been arrested but Li believes that they should be held accountable not only criminally but also through civil litigation. The lawyer representing the residents and traders in the class action says he hired private investigators to identify individual truck drivers and is in possession of license plate lists: damages will be claimed from the convoy’s donors, protesters, a Bitcoin expert who helped the protesters, as well as protest organizers.

Li, who says she has received threats and harassment online since she publicly intervened against protesters, would also like there to be an investigation as politicians and police departments “fail to enforce the law.” “Not only because of the actions of the police department, but in addition to that, the lack of action by the municipal, provincial and federal governments that has lasted much longer than it should have been,” said the young Ottawa resident. they decided to play their political games and not to act. Well, but all of us have suffered for this.”