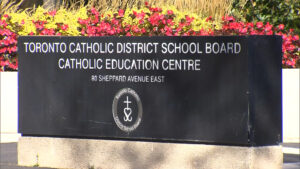 TORONTO – Who would ever have thought that one could look to the warnings of a former Senator (Conservative), Majory LeBreton, in a federal Leadership race, for lessons on educational goals. The institution may fall into the wrong hands, she says, then woe is us.

All states, secular or non, recognize the value of establishing a curriculum for skills development that will give future citizens a better chance at success in a competitive marketplace. They also recognize that they cannot accomplish that without the expressed consent of parents, who can curb the state’s enthusiasm if that curriculum does not also come with “character building” experiences consistent with their own expectations.

“Character” is defined in so many ways, but often the definition comes down to respect for the law and for those whom the law covers – in a catholic environment, it translates into an altruistic ethic of doing unto others as you would have them do unto you. Catholic parents earned a right in law to enshrine their concept of character-building in the Constitution. That “right” is not enforced on non-Catholics, who have the option to do something else in a secular environment. They shouldn’t have it eroded because local politicians have other plans.

In other words, while the State’s curriculum applies to everyone, character-building expected in a Catholic environment applies only to those who meet the “test” of Catholicism. People can engage in a discussion on the relative merits of Catholicism versus some other body of ethics and social mores. However, nowhere is it morally acceptable to “join a system in order to tear it apart from within”. Some current trustees at the TCDSB seem to think precisely that.

It is no secret that there is an internal discussion about what constitutes a “good catholic” or one less meritorious of the adjective. I have never been credited with the former or derided for being the latter, but then again, I have never placed my mores up for public scrutiny. No need. I am not seeking election to a Catholic institution; my moral character may be less of an issue than my professional credentials.
In keeping with our practice of informing our reading public on the issues emerging in the upcoming elections, we have embarked on laying bare the inconsistencies in, or seemingly outright fraudulent practices of, candidates and parties. The upcoming election (municipal/school board) being “non-partisan” and personal compels to make strong observations on people who propose to represent us in the October 24 election.

Trustees and educators from several Greater GTA school boards (public and Catholic) called or wrote to us yesterday inviting us to pay closer attention to them in this election year. Apparently, they too are tired of wokists dictating their agenda.

We are tired of individuals like the TCDSB’s Gang of four who splurge public money for personal gain. Or who play fast and loose with the Trustee Code of Conduct to dismiss parental rights inherent in the Constitution.

In yet another example of this, on the last day of June, trustee De Domenico somehow got the approval to send out a ten-page, full colour election manifesto, at school board expense, to every Catholic family in ward 2, directly into the personal elector’s email address.

The contents are shameless examples of self-glorification and pandering to politicos who only a few weeks ago represented the enemies of the TCDSB.

The only message from such a fraudulent missive (De Domenico had provided a notice of Motion seeking permission to send out “a newsletter” but withdrew it prior to any discussion) is that he must have been given the “operational ok” from the wokist Director, Brendan Browne. Any candidate running against De Domenico deserves the same electoral advantage and De Domenico deserves to be investigated for transgressions of the Code of Conduct and for Conflict of interest.