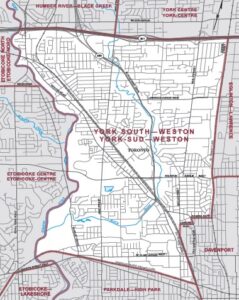 With a population of 116,685 residents, the riding is home to a number of culturally diverse ethnic groups. According to Statistics Canada, in 2016 (most current data available), people who identify as Italian make up 13% of the constituents in the district. That translates into 14,710 residents. 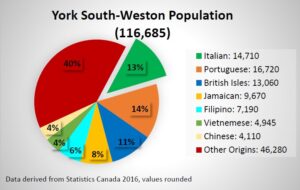 The Portuguese, another numerically significant cultural group, represent slightly more than 14% of population. Other ethnic backgrounds include Jamaican, Vietnamese and Chinese.

Historically, the district has been considered a Liberal stronghold (since 1979), except for the years 2011-2015, when NDP Mike Sullivan took the riding with 40% of the vote. Prior to that, between 1984 – 2000, former Liberal turned Independent, John Nunziata, represented the constituency.

This time around, candidate Hawa Mire aims to garner more support for the NDP. A small business owner and community organizer, she told the Corriere Canadese she is dedicated and “will work hard for the residents of this community”, including seniors, low-income families and workers disproportionately impacted by the pandemic.

At the same time, candidate Sajanth Mohan, a community advocate, is working to gain ground for the Conservatives. When contacted, he said he believes in his party’s recovery plan “to get our country back on its feet economically after the pandemic”. Concerned about the gun crime and gang violence in the area, he said, “making the area safe for families and children is one of my top priorities”.

Rounding out the field includes candidates Nicki Ward for the Greens and Sitara Chiu for the PPC. No other candidates responded to our request for comment prior to our going to print.

According to the latest projections by 338Canada.com (August 31), which uses algorithms that take into account results of all major polls, the Liberals, at 49.9%, are ahead of the NDP by 27-points. The Conservatives at 20.7% trail behind the NDP by two points. 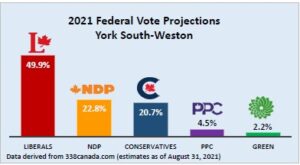