Alberta: ‘only’ 652 infections. But the positives are above 14 thousand. Negative record for Saskatchewan 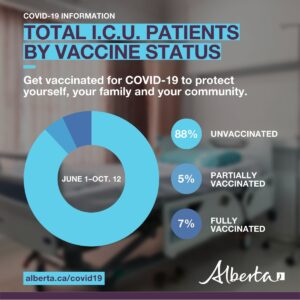 EDMONTON – 652 new cases of Covid-19 in Alberta and, above all, 38 deaths which bring the total number of victims, in the province, from the beginning of the pandemic to 2,901. These are the data from Wednesday, which for the number of deaths represent a negative record: the figure in fact equals that recorded on 12 January for the majority of deaths reported in a single day.

On the other hand, the situation of infections seems to improve, which up to last weekend had been over a thousand a day, but the situation in Alberta is still of total emergency, given that the cases still active (the known ones) are 14,218, divided as follows: Calgary 3,594, Edmonton 3,281, Center 2,908, North 2,845, South 1,578, Unknown Zone 12. Alberta labs conducted 8,620 tests on Tuesday, with a 7.65 percent test positivity rate.

Currently, 1,027 Alberta residents are in hospital, including 236 patients in intensive care units. Of the 791 non-ICU patients, over 73% are unvaccinated or partially vaccinated. In the ICU, 93% of patients are either unvaccinated or partially vaccinated, as Dr. Deena Hinshaw, Alberta’s Chief Medical Officer of Health, said on Twitter (see her tweet graph above). There are 376 ICU beds throughout the Alberta health system at this time. ICU capacity, including 203 rollaway beds, is 75 percent, says Alberta Health Services. Without the extra beds, the capacity would be 164 percent.

Meanwhile, a new emergency is being registered in Alberta: visits and hospitalizations to the Covid-19 emergency room among children are increasing.

The other Canadian province in crisis is Saskatchewan, which has had more than 73,000 cases of Covid-19 since the start of the pandemic and nearly a fifth of them have occurred in the past 28 days. The province’s death rate last month is more than three times the national death rate and is currently the highest provincial death rate in the country for the fourth wave, with Alberta in second place.

Nearly 340 patients are currently hospitalized in Saskatchewan, 75% of whom are not fully vaccinated. The province has one of the lowest vaccination rates in the country.