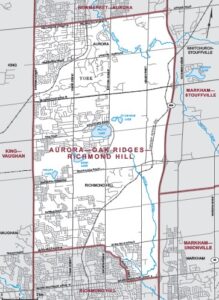 Leona Alleslev is seeking re-election for the Conservatives. She has represented the riding as a Member of Parliament since 2015. Originally, she was elected as a Liberal, then in September 2018, she changed parties and joined the Conservative Party, citing alleged disagreements with the Liberal government over policy positions.

In 2019, Alleslev was re-elected with 44.4% of the vote. She defeated Liberal candidate Leah Taylor Roy who took 42.4%. A difference of only two percentage points. This will be the second time, since 2019, that both candidates will face each other in a general election. 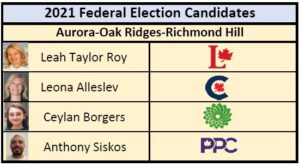 When contacted, Alleslev was unavailable for comment prior to our deadline. Candidate Taylor Roy, a community leader and supporter of Canadian businesses told the Corriere Canadese she acknowledges the community is a great place to live, work and raise a family. She reiterated her party’s message of making housing and childcare more affordable. She also expressed her commitment to “work across governments and political parties to build a stronger, greener economy and ensure everyone in Aurora-Oak Ridges-Richmond Hill has a chance to succeed”.

Also joining the race is Cayla Borgers for the Greens and Anthony Siskos for the PPC. No candidate has been selected for the NDP.

So far, the Conservatives, with 47.3%, appear to be gaining the upper ground. According to the latest projections by 338Canada.com (August 29), which uses algorithms that take into account results of all major polls, they have a 9-point lead over the Liberals at 38.2%. The NDP come in farther behind at 8.8%. 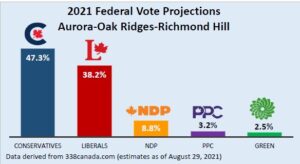 The constituency’s population, 115,230 people, has a strong mix of various ethnic groups including those originating from southeast Asia, the middle east and Europe. According to the 2016 Census, the most current data available, a quarter of the population identify as Chinese. Another significant portion of the population are those who identify as Italian. They make up 12% of the area’s population. That translates into 14,160 residents. 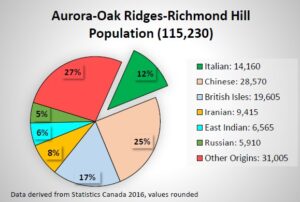