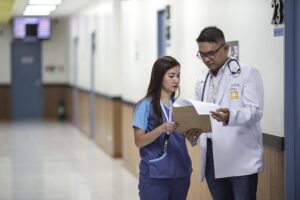 TORONTO – For some time now, doctors and nurses have been asking the various provincial governments to intervene in a massive way to solve the emergency that afflicts the health system in every area of ​​Canada: patients without a family doctor anymore, emergency rooms stormed , staff shortages in hospitals.

A cry of alarm that the various premieres, however, “turn” to the federal government, asking in turn for more funds. They did so four months ago, when Canadian provincial health ministers gathered in Victoria, calling on the federal government to increase Canada Health Transfer, the money each jurisdiction receives for health care, from 22% to 35%. They will do it again starting from tomorrow, in Vancouver: the ministers of health of all 13 Canadian provinces and territories will meet, together with their federal counterpart, Jean-Yves Duclos.

British Columbia Minister of Health Adrian Dix says the extra money is needed since B.C. it is facing an endless array of problems ranging from shortages of nurses and doctors to mental health services. “We need the federal government to be our partner in this approach” Dix writes in a statement. “That means having a serious discussion on Canada Health Transfer”.

The Canadian Medical Association, the Canadian Nurses Association and HealthCareCAN, which represent various organizations and hospitals, have in turn joined forces to push health ministers to retain workers through incentives and call for a Canadian-wide strategy to collect strength data-work, to allow doctors to obtain licenses more easily wherever in the country they are most needed and to improve access to primary care and virtual visits.

Canadian Press reporter Camille Bains registered the concerns of trade associations. According to Dr. Alika Lafontaine (president of the Canadian Medical Association) the collapse of primary care is spilling over to other parts of hospitals besides emergency rooms, as well as long-term care, due to cost cuts. “There’s a recognition that we have fallen far behind the demand for health services in every part of the country. In Ontario, there are tens of millions of health services and thousands of surgeries that have been delayed” said Lafontaine. And he hopes that the meeting of health ministers translates into collaboration across Canada “because the ongoing crises are too big for any jurisdiction. If we don’t act, all of our systems will continue to deteriorate. And I think the momentum for action now it is due to how badly the patients are suffering”.

According to Sylvain Brousseau (president of the Canadian Nurses Association), nurses are quitting their jobs because their mental health suffers from poor working conditions. They often find themselves doing things that have nothing to do with their training, due to a lack of office and housekeeping staff. “Nurses perform 48% of non-nursing duties” he said. “When you ask a nurse to clean the floor because someone got sick, well … it’s not up to the nurses to do that”. Brousseau added that the time for discussions between federal, provincial and territorial politicians is over. “We’ve dialogued a lot. Now, it’s time for action” he said. “No nurses, no healthcare system.”