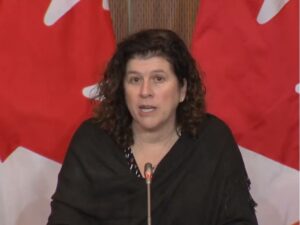 TORONTO – Canada’s federal government was able to rapidly distribute Covid vaccines and pandemic benefits to help individuals and businesses, but wasted millions of doses and awarded billions of benefits to ineligible individuals: that’s what was stated today by the Auditor General, Karen Hogan (in the pic above, from today’s conference on YouTube), who gave the government led by Justin Trudeau a “report card” on the management of the pandemic.

“In 2020, the government decided to rely on the information provided by claimants and limit controls on prepayments to expedite assistance to individuals and businesses affected by the pandemic” Hogan explained. “In doing so, it accepted the risk of some payments going to ineligible people”. And so it was.

“$4.6 billion of overpayments have been made to ineligible individuals, and we estimate that at least $27.4 billion of other payments should be further investigated” the Auditor General said.

$2.3 billion in overpayments were recovered this summer, but the government may run out of time to identify and recover the remainder due to legislative time constraints. Legally, in fact, the federal government has 36 months from the time benefits are paid to verify that the payment has been correct, a time frame that can be extended to 72 months if the Canada Revenue Agency suspects that beneficiaries have provided information false when applying for benefits. But according to the Auditor General, the government’s efforts to verify and recover the improper payments “have not been timely” and “significant irrecoverable amounts are likely to materialize”: Hogan then expressed “concern about the lack of vigor in the activities of post-payment verification and collection” and added that the federal government should “act now to expand its post-pay verification plans and recover those amounts. Legally, the government is required to verify every payment. If it doesn’t want to – considering that many payments have gone to low-income families – he needs to explain that to Canadians. It might even be a reasonable approach, but we need to be clear with the population”.

Hogan acknowledged, however, that the benefit disbursement allowed Canadians to be helped as quickly as possible. “The emergency programs for the Covid-19 – she said – immediately offered financial aid to people and businesses, preventing an increase in poverty, mitigating income inequality and helping the economy to recover from the effects of the pandemic”. Furthermore, without the pandemic supports, the poverty rate would have nearly doubled during the pandemic, from 6.4% to 11.6%.

But at the same time there was also a “side effect”: as the financial support offered to low-income families increased incomes beyond pre-pandemic levels, the benefits program created a disincentive to return to work which it also contributed to the shortage of manpower. “CERB (Canada Emergency Response Benefit) created a disincentive to return to previous employment for more than a third of applicants earning less than $500 a week” Hogan said. “For them, CERB accounted for more than 100% of income replacement. This may explain why around two million people continued to receive benefits for as many periods as possible”.

On vaccine procurement and distribution, the Auditor General gave the government an equally mixed assessment, saying that while it has done a good job sourcing supplies and concluding procurement deals, the rush to acquire vaccines has led to the waste of millions of doses, costing billions of dollars.

The average cost of a vaccine dose was about $30: the total cost of the 169 million doses purchased between December 2020 and May 2022 amounts to about $5 billion. As of May 31 of this year, Canada had 32.5 million doses, estimated at about $1 billion, in stocks nationwide, and another 50.6 million doses deemed surplus and offered for donation to troubled countries. Of those excess doses, 15.3 million were donated, but another 13.6 million expired before they could be donated to another country in need of vaccines. And there are still millions of doses remaining that will expire by the end of 2022 and, if not used, will be thrown away.